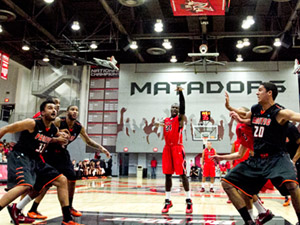 Sophomore forward Stephen Maxwell led all scorers with a career-high 23 points and also added 12 rebounds to give him his second consecutive double-double and fourth in five games.

Junior guard Josh Greene chipped in with 12 points and redshirt sophomore guard Stephan Hicks with 11 points, but the bench was outscored 36-6 by the Tiger’s reserves.

“That’s another thing that’s kind of flipped. For most of the games early, our bench was outscoring the opponent’s bench every game,” head coach Bobby Braswell said. “Right now we got some guys with some confidence issues.”

Giving up the first six points to Pacific, the Matadors never held the lead throughout the game.

Early in the first half the score was tied at 9, but a 15-1 run by the Tigers capped off by two three pointers from junior forward Ross Rivera inflated the lead to 24-10 in favor of Pacific.

Struggling to take care of the ball, Northridge committed 14 turnovers in the first half leading to 19 points for the Tigers.

“When we first came out, we weren’t engaged,” said sophomore guard Allan Guei. “It was basically like we were in a boxing match and we were getting hit and we weren’t doing anything about it.”

CSUN trailed by as many as 18 against the Tigers and went into halftime down 45-30.

Maxwell came out of halftime with a renewed purpose as he scored the Matadors first six points, punctuated by a dunk on a behind the back pass from Greene.

Pulling within six points on a 11-3 run, the Matadors were unable to get closer than five points in the second half, unable to overcome their struggles in the first.

“If we are not matching everyone else’s intensity or going beyond it, it’s going to be a loss,” Maxwell said. “That’s the bottom line.”

An inability to make free throws throughout the game, going 22-37 (59 percent), kept the game out of reach for the Matadors.

After shooting 61.5% from the field in the first half, the Tigers were held by Northridge to just 36% shooting in the second half, which earned the praise of Braswell despite the loss.