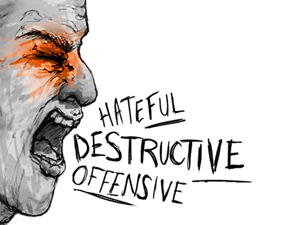 Readers will now only be able to make online comments on articles that state an opinion; which will include all articles written in the opinion page (including this one), reviews made in the Arts & Entertainment section and Sports columns. This is for a slew of reasons, which we will get to in a moment.

If you want us to publish a letter to the editor, please read our “updated comment policy.”

We are an unbiased publication that aims to offer local, campus news that is well-researched and informative. All articles that are not in the Opinion section or stated to be a review should only include facts and interviews with experts on the specific topic.

To maintain the integrity of News, Features and other factually based articles, we will no longer allow comments because the vast majority of commenters do not add to the discussion, but rather detract.

Comments observed in recent semesters have repeatedly done this through their tone, showing a lack of respect and dog-whistle racism (a phrase for veiled attacks against individuals of certain race, ethnicity, gender or sexuality).

The tone in comments is often rude, uninformative and hostile.

Specifically in News articles, comments should be more focused on the structure and the inclusiveness or lack thereof. Biased feelings should not be part of someone’s comment because contrary to opinion or other sections, news always strive to be objective. Additionally, comments attacking what the author wrote about frequently take issue with facts within the article without stating their source.

Showing a lack of respect

We strive to reflect the diversity of our institution through our staff and readers and in doing so respect and invite many differing opinions. In turn, we also expect the same courtesy for our news stories and the subjects therein.

Unfortunately, many comments do not afford that respect and have generally devolved into denigration of staff and sources and more importantly, entire campus organizations. This is detrimental to our school. Discussion of politics, religion, gender, and culture always carry a certain amount of heated debate and opinions, but without showing respect for each other, we can never grow as human beings and thus learn from one another.

The groups most affected on campus are the ones that cater to our campus diversity. Bigotry and zealotry are not conducive to meaningful discussion. It’s bad enough when discrimination is overt and obvious but the nature of these subversive comments is especially nefarious.

This decision was heavily debated, and not unanimous.

Removing comments entirely was originally proposed, but we feel it is unfair for us to have a platform to state our opinions and critiques and not afford the same to you.

We also considered a policy similar to what Reddit uses, where “liking” a comment moves it further up the page and “disliking” it moves it down or collapses it so readers have to click it to view it. However, we already have the “like” feature and do not have enough readers for the “dislike” feature to work.

Currently, you are only able to comment if you register with our website. However, there is no way to force users to use their real names.

Connecting comments with Facebook seemed to be the best option. But we voted against this because Facebook would then own our content and all archived comments would be eliminated.

While evaluating other news organizations and their policies on comments, we saw the general vitriol that accompanied a large variety of their stories. The best organizations seemed to curb this by keeping commenting to a minimum or having sufficient resources to moderate comments. We look to these examples as a basis for our own change.

We know this policy change may not be popular. We will be evaluating and evolving the new policy over time and we encourage you to email the editor in chief any comments or suggestions that will help with this transition.