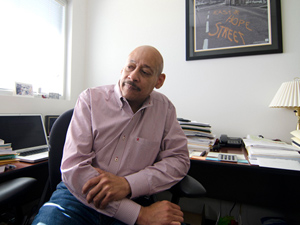 Newly hired state employees must pay 50 percent of their pension due to the Public Employee Pension Reform Act, which requires employees and employers to pay equal amounts of the employees’ pension plan.

Existing and new employees will see some benefits affected by the act such as airtime and post retirement employment, according to the CSU system wide human resources webpage.

Airtime is a credit that an employee can purchase within five years that will add to their pension benefits. Post retirement employment is when an employee chooses to work after retirement and cannot work over 120 days a year for a public employer.

But any individuals that are currently retired, and those who were employed before Jan. 1, will not see their benefits change in their retirement pension plan.

California Faculty Association (CFA) President for CSUN’s Chapter, CTVA Professor Nate Thomas, said while it is a good thing he and other state employees are grandfathered into their older benefits plans,it is not good for new employees because that means less pay.

“For an assistant professor with a Ph.D making about $60,000 a year and paying back student loans the salary is not a lot,” Thomas said.

Pensions are payments made by employers to an employee’s retirement plan. There are three factors used to calculate employees’ monthly retirement benefits: age, total years of service and the monthly rate of pay.

Norris said the money for pensions comes from three sources: the employer contributions, employee of agency and invested income.

Define benefits is a plan where payments are made by both the employee and employer and the employee receives retirement funds based off a formula of their years of service, age and their salary amount.

Define contribution is when employees and employers set a specific amount of monthly payments to put aside for the retirement of the employee.

“When we retire we get a dollar amount of how long we worked there, how old we are and monthly rate of pay,” Svorny said.

Svorny is in favor of PEPRA and said if the state increase taxes, businesses and people may leave the state because high tax rates could make the state unattractive resulting in a loss of tax revenue.

Thomas said the CFA originally did not want the reform to be passed, but hopes it will stop some criticism on public employees and educators.

Thomas also saidpeople have complained that state employees and pension plans were breaking the state. He does not think pensions are breaking the system and thinks that the reform act might quite them down.

“These are trying times and there were people after the public employees saying we are breaking the system, but honestly we are helping the system,” said Thomas.

According to the Government Code section 77522.20, the earliest age for retirement is 52 with a one percent factor and the latest age is 67 with a 2.5 percent factor for all new non safety members.

Factors are percentages that help determine an individuals retirement plan benefits depending on their age and retirement formula.

In that same section of the code the earliest age of retirement for the safety workers is 50 at a 1.4 percent factor and the latest age, at 57 and over, at a two percent factor.

The formulas of the benefit plans are meant to encourage a later retirement age for employees.

Thomas is in favor of the reform and said it saves the state money.

“In trying times it is about saving money,” Thomas said. “When money is low you have to cut things to save money. I think the governor is staying true and rewarding us by making a reinvestment.”