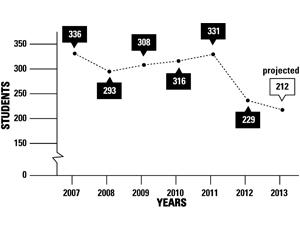 With the passing of the American Taxpayer Relief Act of 2012 (ATRA) on Jan. 1, Congress averted several laws scheduled to take effect, such as the expiration of the 2001 Bush tax cuts and federal emergency unemployment insurance, and delayed $1.2 trillion in mandatory cuts or “sequesters” on domestic spending until March.

The ATRA included some important items for the higher education community. According to the American Council on Education (ACE), the act extended the American Opportunity Tax Credit (AOTC), for five years, which “allows students and their parents to claim up to $2,500 a year for college expenses, (which) benefits 9 million families a year.”

It also extended a few more tax deductions and credits until the end of 2013 and gave permanent status for employer-provided education expenses, the Student Loan Interest Deduction and Coverdell Education Savings Accounts.

The most significant concern for higher education may be the two-month delay in the sequesters. The mandatory cuts were scheduled under the Budget Control Act of 2011, a federal statute that raised the debt ceiling and avoided the U.S. from defaulting on its debt, which would have downgraded the country’s credit rating and increased interest rates.

As part of the deal, the cuts necessary to decrease the federal debt were put off until the end of the 2012, biding Congress time to find alternative ways to deal with the deficit.

According to ACE, if Congress does not find a way to avert the $1.2 trillion in cuts by March 1, many programs such as the National Institutes of Health, the National Science Foundation and many Department of Education programs would face millions of dollars of funding reductions.

Although Federal Pell Grants would be protected, other programs such as Federal Work-Study (FWS)would face the axe. FWS is a  type of financial aid that that allows students to earn money to help pay for school.

“If sequestration goes into effect on March 1, it would reduce our Federal Supplemental Educational Opportunity Grant (FSEOG) and FWS funds by 8.2 percent for this current year,” sarid Lili Vidal, director of financial aid and scholarship department.

“By that point, we will have paid out 100 percent of our FSEOG funds and almost all of the FWS funds would have been earned by students,” Vidal said. “This could result in students being billed for FSEOG funds already received.”

“Because students must be paid for hours worked, if at that time students have earned more than 91.2 percent of the funds available, the university would be required to find the funds in its own budget to cover the earnings, and all work-study students would be stopped from earning any further FWS funds,” Vidal said.

Around 230 students were employed through work-study last year, said Josefina Carbajal, the CSUN FWS manager. She said she expects at least 212 work-study students to be employed this year.

Diane Young, a freshman psychology major, works at the Financial Aid office as a student assistant through the FWS program. Young said an on-campus job is very beneficial to her schedule.

“Work-study is good because your bosses and supervisors understand you are a student,” Young said. “You have the opportunity to take your classes and work. When we are not busy, we can do our (homework.)”

Carbajal added CSUN’s FWS budget allocation has been reduced by around $280,000 in the last three years. In the 2009-2010 school year, former CSUN President Jolene Koester allocated special funds for departments to keep or hire FWS student employees and insure that eligible FWS students  would be able to find jobs. This year, there is no such extra funding.

Young said that if she lost her job on campus, her options for work would be limited.

“I don’t have a car, and I usually ride my skateboard everyday,” said Young. “If I had to take a job elsewhere I don’t know how I would be able to juggle my classes and how I could pay my bills.”