Board of trustees express disappointment with Gov. Brown’s budget at first 2013 meeting 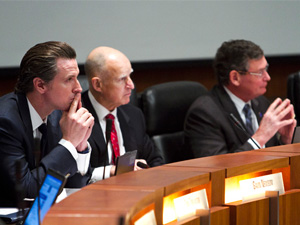 Andrew Lopez
This article has been updated with additional information.
In the first California State University board of trustees meeting of 2013 held Tuesday, trustees expressed mixed feelings over Gov. Jerry Brown’s 2013-2014 budget proposal, which restores some funding to the 23 campus system but falls considerably short of the CSU’s own proposal.

Benjamin Quillian, the chief financial officer of the board, said Brown’s proposal of an additional $125 million in CSU funding, which will increase between 4 and 5 percent over the next four years, will help stave off tuition increases and create more high-demand courses.

Still, Quillian said the proposal does not fulfill all the needs of the system, which has requested $371.9 million for 2013-2014.

“The budget proposal does fall short of the board’s approved budget and the request,” Quillian said. “It falls considerably short.”

The board is asking $48.1 million for mandatory costs, including campus utility expenses for the 23 universities and the rising rates of health care premiums for its employees, to be covered in its budget proposal. The board is also proposing the state fund $58 million for a graduation initiative, $20 million for information technology infrastructure upgrades and $50 million for urgent maintenance needs and other costs.

CSUN President Dianne Harrison said Brown’s proposal did not allow for the two sides to meet in the middle.

“The governor’s plan is that we should work within his plan,” Harrison said. “The net effect was this board and the chancellor’s office and the presidents are going to have to go back and do some difficult decision-making about how we stay within the governor’s budget.”

Lt. Gov. Gavin Newsom told the board that the governor’s proposal was unlikely to call for any additional CSU funding in the May revise of the budget, a possibility mentioned by Quillian.
“I think the chances of that are rather modest,” Newsom said. “You’ve got $115 million of augmentation with over $370 million of priorities.”

Harrison said campus presidents would meet in February with Chancellor Timothy White to begin working towards solutions to bridge the gap of the two budget proposals. The board said a tuition increase was still not an option the CSU is considering in order to fund the disparity.

Brown’s proposal includes $10 million directed towards online strategies and developing new courses.
Quillian said the CSU has already begun to invest in online education, citing Cal State Online, a new program this semester that offers degree programs to students who were unable to finish their schooling.

“We are on the ground running,” Quillian said.

The board voted to change language in the CSU student fee policy that will designate Cal State Online as a self-support program, meaning no state appropriations will go towards its costs, CSU spokesman Mike Uhlenkamp said. Students who enroll will pay between $400 and $500 per unit.

The board was also presented with a gift report of philanthropic support for 2011-2012. The CSU reported $297 million in gift commitments from over 224,000 donors to support student achievement and program innovation.