Drone strikes: it’s not a game 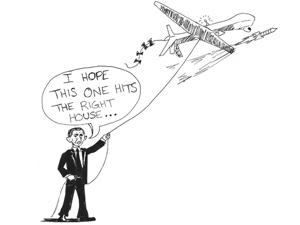 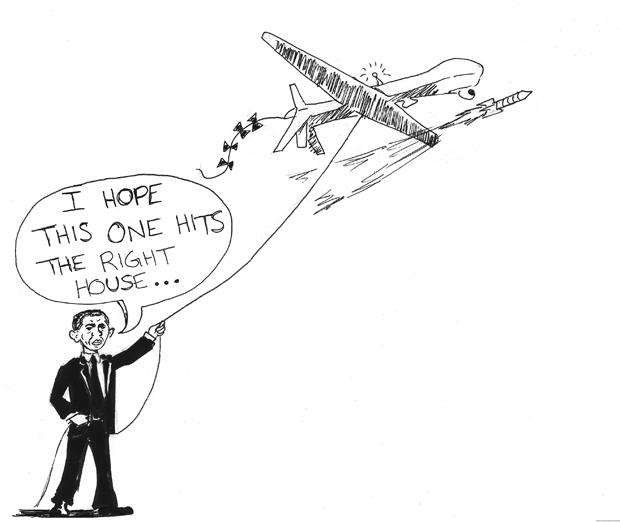 The United States is no longer fighting a conventional war on terrorism that involves boots on the ground. Instead, it is fought from thousands of miles away in front of a computer screen with unmanned drones. Consequently, the result is a process devoid of emotion, sympathy and more importantly, human decency. Furthermore, President Barack Obama’s decision to make a “kill list” of terrorists, that he now shuffles through like an adolescent boy admiring his baseball card collection, is grotesque.

Since the president took office in 2008, he has overseen 300 drone strikes in Pakistan. A big chunk of them, 122, took place in 2010. The president continues to justify the use of drone strikes to combat terrorism and keep Americans safe. But with every strike, he is garnering further resentment from countries in the Middle East and Africa as U.S. drones continue to kill innocent men, women, and children in countries where we don’t belong.

Drones are known more specifically as unmanned aerial vehicles. They are the quickest, cheapest, and “safest” way to kill so-called terrorists. However, drones and their subsequent deployment have become a symbol of death and destruction that continue to strike fear into civilians of Yemen, Somalia, and parts of Pakistan.

The U.S. military has reportedly spent $26 billion on drones since they were first utilized in 2001. However, this is not only an issue of a bloated military budget in our current economic state, but more specifically an issue of morality. We can no longer remain indifferent to these strikes simply because too many innocent people are killed by drones. These are the same drones that represent the purported land of the free and justice for all.
According to the Bureau of Investigative Journalism, an independent news organization, states although there is no official report, it is estimated that roughly 290 civilians have been killed as a result of these horrific attacks; 64 of those were children.

Many of these children are not old enough to understand the complexities of war, but are constantly looking to the sky, praying that they can walk home from school without being attacked by drone-dropping missiles.

“You’ve got to mow the lawn all the time. The minute you stop mowing the lawn, the grass is going to grow back,” said Riedel, according to the Washington Post.

Although Riedel’s statement attempts to illustrate the ineffectiveness of the use of drones that will only allow the “grass” to grow back, it also highlights the lack of moral compasses among our leaders. As the nation that attempts to set the pace for equality and democracy across the globe, should we compare human beings (regardless of their criminality) to blades of grass?

Furthermore, the use of drones fosters an apathetic behavior among our soliders who are sitting behind a computer screen and dropping missiles on white dots that they perceive as terrorists. This eliminates any kind of sympathy for the dead and turns it into a chore, like “mowing the lawn.”

We have known the president to be compassionate and sympathetic, especially to children, having two of his own. We expected him to be the president who would stand firmly against unnecessary war and killing of innocents. While Obama continues his aggressive counter-terrorism efforts, his labeling of drone strikes as counter-terrorism is disingenuous to say the least. Drone strikes are meant to kill terrorists so that we may feel more safe. While some of these strikes may indeed kill terrorists, what we are telling the world is that children in our country are more important than children (or collateral damage) in target countries.

It all boils down to what kind of country we want to be. We have been the bully of the world, arrogantly marching around and asserting dominance in other sovereign nations. We have murdered people on the opposite side of the earth simply because we want to quell threats that have not yet materialized.
Enough is enough. We in the United States cannot rid ourselves of compassion for the citizens of other countries simply because it does not touch our lives directly.

More transparency must exist from the president in his second term. American citizens must challenge his approach, which represents us all. Obama was inaugurated into his second term this past Sunday and maybe this time, he will hold himself accountable for the promise he once verbalized.

“I will also hold myself as president to a new standard of openness …. Let me say it as simply as I can: Transparency and the rule of law will be the touchstones of this presidency,” said Obama in a memo to his senior staff.

If peace is indeed the destination, then peace must also be the focal point of the journey. Humanity will never come together and see eye-to-eye with blind, aimless killing followed by justification and minimization. We would not accept it from terrorists after 9-11, so we must not accept it from ourselves.

Kevin is a senior majoring in journalism and he thinks that drone strikes are only acceptable after seven kills in a row in “Call of Duty.”