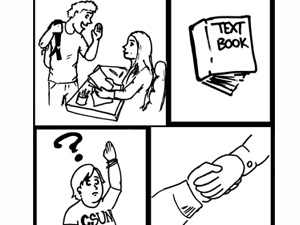 There’s a little thing we in the newspaper business like to call “News You Can Use.” You know what I’m talking about—little slice-of-life things such as recipes and reminders to keep your tires properly inflated to improve gas mileage.

I can’t tell you how many times I’ve been in classes, watching students sleepwalk through the first five weeks, checking Facebook on their laptops and texting under the desk. They’re paying zero attention to what’s going on until that magic moment when the Esteemed Instructor finally says, “And now, I’m going to talk a bit about what will be on the midterm…”

And BAM. Eyelids snap open. The iPhone is stashed away. Spines go ramrod-straight. Notebooks are opened—maybe for the first time in the semester. Everyone is paying rapt attention. Not because they might want to, oh, I dunno, learn something. But rather, because they’ve heard the dinner bell, and Pavlov is laughing as they salivate. The end is not understanding for most students I’ve observed, but rather a quantifiable result that feeds their ravenous GPA.

My pessimistic gut feeling is that most students would rather get a good grade than actually learn anything. You can tell me if I’m right or wrong via the poll at the end of this article.

In the meantime, I’m just gonna assume that’s the case, and help you get a better grade. None of these tips will make it easier for you to differentiate an equation, memorize the periodic table of elements, or remember the capital of Paraguay (it’s Asunción). But follow this tried-and-true method, and you will move your grade up through the magic of ass-kissing.

Please. Feel free to clip-’n’-save. It’s news you can use.

Introduce yourself! It’s simple. Do it. Day One, maybe Day Two of class is good. Believe it or not, most college professors are human beings (though recent clinical trials show that as many as 2.9 percent are not). And human beings want a human connection. Give them that. Take 90 seconds at the end of class and say, “Hi, I’m Bob. Nice to meet you. My friend took this class a year ago and said it kicked ass. I’m looking forward to discussing the capital of Paraguay, which I believe is Asunción.” Put a face to the name. Make yourself a human being, and not a student ID number, and you’ve made it that much easier for some crusty ol’ prof to actually like you and move that B to a B+.

Books! This is the big one. What do academians love more than anything else? Probably proper footnoting in MLA style. But after that…it’s books. So scour the remainder table at Barnes & Noble and sink $6.99 in the investment of a proper ass-kissing book. But for the love of God, do NOT make the fatal mistake of getting them a book related directly to the class or their academic specialty. If you’re in Medieval European History 210 and you get them a book on Medieval European history, you just inadvertently told them there’s something more they should know about their subject. You just bared your fangs at the alpha dog, and there’s no way they’re gonna let you win that battle. Go one step deeper. In week two, when Prof. Crusty mentions how much he loves the song “Dear Prudence,” make a mental note. Then gift him that book on the Beatles.

Ask a question! Anything will do, really. Doesn’t even need to be a good question. But if you actually engage while Row 2, Seat 6 is busy texting his girlfriend, congrats—you just stood out from the crowd.

Shake hands on the way out! Leave them on a high note. Thank them. Tell them how much you enjoyed the class. Make their last memory of you a good one, and suddenly that final essay question can move from an A- to an A buoyed by the power of the warm and fuzzy. Plus, you never know when your paths will cross again. You always need more allies.

—Jim McLauchlin is 44 creaking years old and back in college, so really, what does he know?