Lakers season spirals out of control 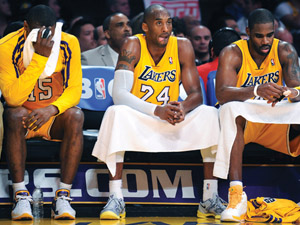 After two stellar off-season acquisitions in Steve Nash and Dwight Howard, the Los Angeles Lakers sit in the 12th spot of the Western Conference with a record of 17-24 halfway through the season.

As the great Bill Parcells would say, “You are what your record says you are.”

Despite injuries, that statement could not be more true for the Lakers as they rank 26th in opponents’ points per game allowing a ridiculous 101.4 per contest. The Lakers are not helping themselves by averaging 15.3 turnovers per game, fourth worst in the NBA.

The Lakers’ struggles don’t seem to be temporary. It is exactly halfway through the season and their playoff hopes are dwindling in a strong and ferocious Western Conference.

One reason for this is the failure of Mike D’Antoni to adjust to his personnel and let go of his system.

D’Antoni is an offensive minded coach who successfully led a run-and-gun offense when he coached in Phoenix. His teams ran opposing teams out of the gym with a high tempo offense that would simply outscore the opponent, no defense necessary. It absolutely made sense on his previous teams such as the Phoenix Suns with young, athletic players such as Shawn Marion and Amare Stoudemire, but not with the current Lakers.

Four of the five Lakers starters are over the age of 30, and the fifth, Dwight Howard, is coming off major back surgery so running up and down just doesn’t fit their team.

D’Antoni needs to put Pau Gasol and Howard in a position to succeed because of their immense talent and size that can create match up problems for almost everyone in the league. A coach needs to adjust to his players, not vice versa.

Kobe Bryant is another problem when he decides to play hero ball and carry the team on his back. Bryant has attempted a league-high 907 shots this season, 131 more than the second player on that list, Russell Westbrook of the Oklahoma City Thunder. Although Bryant has been shooting 46 percent, it is still not the formula for this team to win. Kobe needs to get his star-studded teammates more involved. In games where Bryant has had five or more assists, the Lakers are 14-10, as opposed to 3-14 when he averages less than five assists.

The Lakers are old, disengaged, and most importantly, they look defeated. They lack motivation and most certainly don’t have the look of fire that hungry teams naturally have.

Every year we hear that the Lakers are built for the playoffs but this year the cruise control is broken and they need to get out of neutral, fast. The game isn’t played on paper and the sooner the Lakers realize that, the sooner they will climb up the ranks of the Western Conference, where fans everywhere expected them to be when the season began.

As of right now, they are a $100 million train-wreck with no light at the end of the tunnel.