Messi missing World Cup trophy to be called best ever 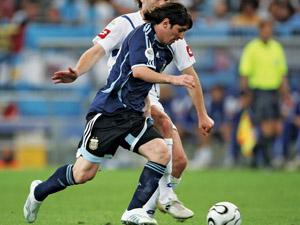 Barcelona forward Lionel Messi recently earned his fourthBallon d’ Or, and with it, he becomes the first player to earn this honor in consecutive years.

This award not only gives fans more reason to insist that Messi is better than the other candidates up for the award, Portuguese superstar Cristiano Ronaldo and Spanish player Andres Iniesta, but also gives them ammunition to claim that Messi may even be the best player ever.

However, this honor still shouldn’t crown Messi as the best soccer player in the world since he is not able to perform as effectively as he does for FC Barcelona, his club team, when he plays for Argentina, his national team.

Even with Argentinian head coach Diego Maradona constantly praising him – and even naming him the best in the world – Messi has not been able to lead Argentina to aFIFA World Cup championship despite having two opportunities to do so.

It’s not because Argentina lacks talent. According to the FIFA/Coca Cola World Ranking Argentina ranked 3rd and is under Spain and Germany, who take first and second respectively.

The Argentina national team has talent that has taken their players to some of the most prestigious clubs, like defender Pablo Zabaleta and strikers Sergio Agüero and Carlos Tevez who play in the English club Manchester City or defender Javier Zanetti, winger Rodrigo Palacio, midfielder Esteban Cambiasso and striker Diego Milito, who play for the Italian club, Inter Milan.

Though Messi has broken a record, he has yet to give his country the ultimate football prize: a FIFA World Cup. The day Messi wins with a team other than Barcelona is the day a legitimate case for him being the best player in the world can be made.

French soccer legend Zinedine Zidane, now retired, managed to be awarded with a Ballon d’Or, two Player of the Year awards, UEFA Champions League, and the FIFA World Cup, which places the French player in a historical position that no one else has accomplished yet. Zidane performed with his club and his international team and although he is not adorned with four Balon d’Or awards, he was able to give France a World Cup, the ultimate prize to any soccer loving country.

Zidane proved himself in La Liga playing with Real Madrid, where he scored a total of 35 goals and with Juventus in the Italian league, Primera A, where he led both teams to several awards. Zidane and the French national team was the first team since West Germany, to win the Euro Cup in 2000 and the World Cup in 1998.

The Spanish soccer league La Liga, the league Messi’s team is in, routinely sees just four teams in contention for a title. Seeing Messi play in another league, such as the English Premier League where everyone has an equal opportunity to win it all, would be the perfect test for Messi to prove he’s the cream of the crop.

However, according to the Daily Mail, Messi has signed a new deal with Barcelona until 2018, and with this new contract, the idea of him proving he can win elsewhere vanishes.

Although Messi deserves his fourth Ballon d’ Or, until he gives his national team a taste of what it’s like to bring home the World Cup, he can’t be considered the best player in the world.