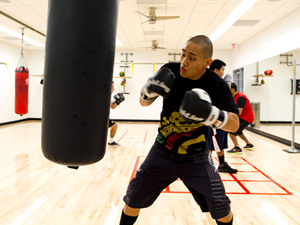 Jimmy Francis, director of the center, said he is proud of the accomplishment of opening the building.

“I think we’re doing a good job of serving our target market which is the CSUN community,” he said.

The SRC is a 118,000-square-foot facility which offers fitness zones, group exercise studios, a rock-climbing wall, gymnasium courts and and indoor jogging track.

The building itself has won seven awards for architecture, design, and sustainability, including LEED Gold Status. To achieve LEED Gold Status, a building must demonstrate energy-saving lighting and controls, water-saving faucets and fixtures, and reduced construction waste, among other criteria. In 2012, the recreation center also won the Pacific Coast Builders Gold Nugget Award for greenest sustainable commercial project, recognizing the SRC for complex energy-conserving designs.

“What’s really exciting about the number of awards received is how they’re based a lot on architectural significance,” Francis said. “Of course, receiving the award of LEED Gold certification was an unbelievable accomplishment. It’s humbling.”

The SRC has also been praised by students for its services.

“This place is spacious and clean. The rock wall is so cool,” said sophomore Bria Lee.

“Compared to Planet Fitness, this place looks like a resort,” she said.

Alumni are also invited to come back use the facility at a discounted rate.

Crizam Carlos graduated in 2011 but continues to use the center. He not only uses it for himself, but is also a group exercise instructor.

“I use the dance studio a lot because I’m a part time dancer,” he said. “I teach there, I work out there. I spend a lot of time on the dance floor.”

Compared to other gyms Carlos said, “The SRC is in the top tier of all the gyms I’ve been to and worked out in.”

Despite the accomplishments, Francis said he would like to see increased enrollment from faculty and staff.

“We’re currently doing a survey of faculty and staff and asking them some questions to better understand some barriers to joining.”

As the SRC celebrates its anniversary, advancements are still in play. The projects include the addition of a 125,000 square-foot Outdoor Artificial Turf Field east of the building in the G4 parking lot. The field will be geared toward sport club use, open recreation, intramural programming and events that will also be lit for nighttime use.