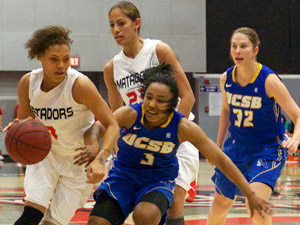 Northridge came out swinging using defensive pressure to jump out to a quick 4-0 lead with back-to-back steals which led to layups. The Matadors would never extend their lead beyond the 11-6 edge they held at the 10 minute mark as they went into halftime with a six point deficit.

Throughout the game, CSUN looked sharp defensively as it held the Gauchos to 56 points and forced 22 turnovers. On the offensive side of the ball, however, the Matadors finished the contest with a season-low 37 points, the second-lowest point total recorded under third-year head coach Jason Flowers.

Flowers noted that the offensive troubles had put added stress on the defense.

“All things considered, and only giving up 56 points, when you turn the basketball over it puts a lot of pressure on the defense,” Flowers said. “We didn’t do as well offensively and it played over onto the defensive end.”

UCSB took the momentum from the start of the second half, quickly expanding their lead to 12 points in the first five minutes.

“We were still doing well defensively, a lot of shots just weren’t falling for us,” sophomore guard Ashlee Guay said. “We were getting there but we just weren’t finishing.”

Taking control of the game in the second half, UCSB went on a prolonged 21-7 run from which the Matadors could not recover. CSUN never got closer than 13 after the scoring outburst, eventually letting the deficit expand to 20 points.

“I think a lot of our effort dropped off after half-time. We need to work better as a team at staying together during times of adversity,” senior forward Violet Alama said. “Santa Barbara is a good team and they just outworked us in the second half.”

The Matadors normal reliance on the 3-pointers was of no help throughout the game as they shot 14.3 (3-21) percent for the game from beyond the arc.

“Some nights you’re on and some nights you’re off,” Alama said . “We rely a lot on making our threes and when our shots arent falling some of us are demoralized and we tend to not shoot or not have as much confidence in our shot and I think we just need to get in the gym and get repetitions.”

The Matadors shot 24.5 percent overall, and for the first time this season, no player scored in double digits.

UCSB’s defense) contained, but most of the time its our fault for not doing our job pushing and getting into the paint like we are supposed to,” Guay said.

Northridge has not beaten UCSB at home since 1984, and has one victory in Santa Barbara since that time.

“It’s the season, it’s unpredictable, it’s never perfect and it’s learning throughout the entire process to come together as a team,” Flowers said, “There’s all kinds of life lessons that we can learn throughout the season, and this is a point in the season where we need to learn those things and start applying them and get better.”