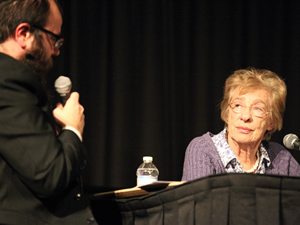 Holocaust survivor and Anne Frank’s stepsister Eva Schloss spoke to a packed Northridge Center at the University Student Union to share her story.

The event started with a memorial service for the six million who died during the Holocaust. Six members of Rorh Chabad at CSUN each lit a candle to represent the ones who were lost.

Cynthia Mazouz, senior business management and marketing major, serves as vice president on the Chabad board.

“We’re a Jewish student organization and try to have students come to events and connect to their Jewish identity,” Mazouz said.

Schloss spoke of her childhood in Vienna, Austria and eventually her time at the concentration camp Auschwitz.

After two years of German occupation in Austria, her family moved to Amsterdam. She said they had to be split apart as they went into hiding because the Dutch apartments were so small. Schloss stayed with her mother and her brother, Heinz, went with their father.

They would reunite later by way of a Dutch nurse who approached Schloss and her mother in a safe house.

“It was a Tuesday, my fifteenth birthday. We went down to breakfast, heard knocking at the door, and Nazis stormed in and took us away. The Dutch nurse was a double agent,” Schloss said.

Upon their arrival to Auschwitz, Schloss was separated from her brother and father. They would die at the concentration camp Mathausen several days before the Americans arrived to liberate them.

Schloss and her mother were prisoners at Auschwitz, where the Nazis told them to forget they were human beings. “Their cruelty was just indescribable,” Schloss said.

One day in January 1944, Schloss and her mother woke up to find that the Nazis had fled during the night. The gates were open, but they were too afraid to leave. Days later, the Russians showed up to rescue the prisoners at Auschwitz. “They clothed us, fed us and guided us to safety,” she said.

It was during that time with the Russians that Schloss and her mother ran in to Otto Frank, Anne Frank’s father. Before the war, Schloss and Anne would play in the street together.

“We were definitely not best friends. I was a tomboy but Anne was into her hair, fashion and film stars,” Schloss said.

After the news of the rest of their family members’ unfortunate fates, the three of them traveled the rest of the way to safety together under the care of the Russian soldiers.

“At least we have each other, but this poor man has nothing to live for,” Schloss remembered her mother saying. Years later, Otto Frank married Schloss’ mother. She would go on to help him translate Anne’s diary and get it published.

Schloss went on to speak of her three daughters and five grandchildren. “My children considered him (Otto) a second pa. It was really nice because we had gained a family,” she said.

Freshman Karen Baum, an undeclared major, said that the event gave her a different perspective of Anne Frank.

“It’s another puzzle piece to the Holocaust,” Baum said.

“It humbles you to the point where you realize the difficulties we face everyday are no comparison to what happened in the Holocaust,” Mazouz said.

When asked about the current spike in anti-Semitism, Schloss said: “I’m an optimist. I feel eventually we will create a more harmonious world.”