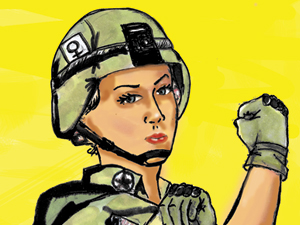 In a move that was a longtime coming, Defense Secretary Leon Panetta, lifted the ban on females serving combat roles in our nations military branches on Thursday. The ban was put into place in 1994 and effectively removed women from serving in high risk jobs during wartime, including infantry, artillery, and any position deemed “ground combat.”

While conservatives and traditionalists choke on their frothing outrage-spittle and sputter inane logical fallacies about women being physically unfit (the same standards male members must adhere to, otherwise they are also excluded, conveniently enough) or being more likely to suffer sexual assaults (like the government sponsored legitimate rapes condoned by Republicans in Virginia and abroad), our saner citizens have a chance to reflect on this practical decision.

I expect the next brilliant Republican talking point to encompass Brick Tamland’s pleading response to women sharing the spotlight from the movie “Anchorman.”

“The bears can smell the menstruation!”

In this instance, just replace the bears with Muslims.

Panetta will be passing the torch to expected incoming Secretary of Defense, Chuck Hagel. According to defense officials, Hagel supports the move. Hagel himself is a combat veteran of the Vietnam War. His experience with an unneeded conflict makes him an ideal candidate to see this adjustment through.

Each branch of the military will be setting forth their proposed plans of action on how to integrate these changes on May 15. It’s expected that the specialized combat units like the Navy SEALS and Special Forces will ask for exclusion. That’s another step to be fought for in a truly equal military but for now there is at least the opportunity for further integration.

The most absurd argument about the ineffectual nature of women and their perceived physical weakness is perhaps the strongest argument that the naysayers have. Of course, it’s easily dismissed once the realization hits that no matter what the gender of the individual is, they cannot be considered for combat jobs unless they pass preset physical requirements. That means, if a male can’t do the proper amount of pull-ups, they can’t go off and shoot other people. Those requirements will not change for this new policy so women will be held to the exact same standard.

That’s equality and it’s fair and nothing more can be asked at this time. We’re long overdue for changes and it’s good to see some action from a generally inactive government. Especially one that has seen the changing landscape.

Over the last decade, our war efforts have moved from very traditional ideas of frontline combat and rearward deployment of support. That frontline no longer exists as we fight a continual guerilla war against counter-insurgents. This enemy doesn’t abide by rules of conduct on or off the field. They instead strike wherever they see an easily destroyed target. Due to this, 152 women have died in the Afghanistan and Iraq wars as their traditional support roles were also targeted.

As it happens often with emotional cultural discussions in our country, we end up discussing the absurd hypotheticals and miss the forest for the trees. In this case, we actually just shoot the trees with bullets and hope the forest is still standing.

Now that women are allowed to die equally next to men, maybe our chicken-hawk representatives and leaders will think twice before sending them to a war that doesn’t need to happen. Maybe the sight of mangled and torn body of a young American women, serving her country, will be the shock our society needs to jolt us out of our vicious, drooling lust for killing abroad.

I don’t actually have faith that this will be end result but I can hope at least.

We have too easily seen war and the loss of precious life as something easily engaged and subsequently dismissed. It’s bad enough that all of our action overseas has engendered vast swaths of the world to loath us, but the loss of life that was a complete waste in pursuit of unattainable goals was always drenched in misguided patriotism. While anybody dying in war is a tragedy, maybe the prospect of female soldiers laying down their lives will stem the tide of our countries all too eager lust for war.

-Nathan is a graduating senior and former Marine. He runs when he sees bears and menstrual blood.