NFL comeback player of the year: Manning or Peterson? 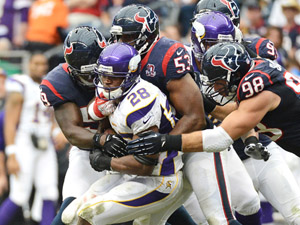 Conventional sports knowledge tells you that tearing both your ACL and MCL in the last week of the regular season usually means that you will not be 100 percent for following year. Apparently this only applies to humans, a category that Minnesota Viking’s running back Adrian Peterson does not belong to.

Peterson did not take long to show the football world why he is the most feared running back in the game today. Less than nine months removed from surgery, he torched the Jacksonville Jaguars for 84 yards and two touchdowns in the first game of the 2012 season.

He continued to post big numbers on his “road to recovery,” but from weeks 7-17, he proved why he is one of the most transcendent players of our generation. Posting 100 yard plus rushing games in nine out of the last 10 games and averaging 160 yards per game, he led his team to the playoffs with a 10-6 regular season record.

By sheer numbers, what he did was nothing short of amazing. He did all of this with a below average quarterback who anchors the second to worst passing attack in the league. He regularly faced suffocating eight and nine man boxes who expected him to run every time.

Averaging a career best 6.0 yards per carry this season, he finished the year nine yards shy of the single-season rushing record of 2,105 yards held by Eric Dickerson.

Adrian Peterson did not only have a sensational comeback season, he had one of the best individual seasons in NFL history.

After sitting out the entire 2011-2012 season due to neck surgery, Peyton Manning came back in 2012 to have one of his most productive seasons in career.

Manning was not only returning from his fourth neck procedure, but he was also released this past off-season by the Indianapolis Colts.

Afraid his neck couldn’t hold up or that he may not have enough zip on his passes, multiple teams passed on the opportunity to take him, landing him into the lap of the Denver Broncos.

For the first time in his career, Peyton went into a season where he had to get acclimated to a new team, environment and coaching staff, and he did a mighty fine job of it.

He lead the Broncos to the league’s best 13-3 record in the regular season, clinching them the number one seed in the playoffs.

With Manning as quarterback, the Broncos won their second consecutive AFC West division title. Denver also ended the regular season with an impressive 11-game win streak, including a 35-0 second half against the San Diego Chargers who held a 24-0 halftime lead.

Manning’s Quarterback Rating (QBR) of 105.8 was second to the Green Bay Packer’s Aaron Rodgers’ of 108, ranking him first in the AFC. The 105.8 QBR is second highest in Manning’s career.

Manning was in the top five in nearly every offensive category. He ranked third in the NFL with 37 passing touchdowns, his highest total since 49 in 2004. Passing for 4,659 yards put him in second place, nearly equaling his career-high 4,700 in 2010. His 68.6 completion percentage was tied for the highest in the NFL this season with the Atlanta Falcon’s Matt Ryan.

Not only did Peyton comeback from surgeries that were suppose to derail his career and make him an average quarterback at best, he turned in probably his best all-around performance of his career. Offenses run through a quarterback and no one else, without a strong leader there is no effective offense. Peyton proved he can go anywhere and be the best.