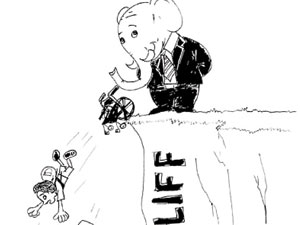 Our country’s financial health was teetering on the edge because of the reputed apocalyptic fiscal cliff, but fortunately, this was not the end for the nation. Education, especially student aid, lucked out this time, though students continue to face the same financial problems that plagued them before.

None of the fiscal cliff revisions that pertained to education were meant to actually increase spending, but rather, they were intended to extend programs and funding. The American Taxpayer Relief Act of 2012 permanently extends student loan interest and eliminates the 60 months of repayment rule for deduction. There was also a temporary extension of the American Opportunity Tax Credit that allows students and families to receive tax credits of up to $4,000 a year on school expenses.

Although these tax provisions help to lessen the financial burden for college students, it does not solve one of the most detrimental issues facing this nation; student loans and the subsequent debt miasma.

An article by KQED, shows tuition in 2012 was three times greater than it was in 1992. But despite the devastating increase in tuition, people continue to enroll because the job market is bleak, and it is even worse without a diploma.And enrolling in college today means facing a grim future with a pile of student loan debt.

Right now, it’s obvious that many in the government shouldn’t have any say when it comes to education (Ahem, Paul Ryan and cohorts). In 2012, Congressman Paul Ryan’s proposed GOP budget was a major insult to the nation’s youth. He proposed a $5.3 trillion slash in education funding. Many of those cuts would include programs for students needing the most help, particularly those from low income backgrounds and those with special needs.

Following Ryan’s proposed GOP budget, Obama was reported saying it was “nothing but thinly veiled social Darwinism.” Obama is right. Education is often seen as the tool to raise individuals up and out of poverty while getting one step closer to reaching the purported American Dream. The GOP’s constant move to slash education further marginalizes low income students and in effect keeps the rich, rich and the poor, poor. Perhaps more importantly, solving the problem by making loans more accessible will not end up yielding better results for the individual or society as a whole.

According to Business Week,student debt exceeded credit card debt for the first time in 2010 and surpassed auto loan debt in 2011. It is now totaling $43 billion, possibly making it the next bubble following the housing burst. A recent Harvard study showed that 25 percent of loan borrowers are behind on their loans. This has the potential to exacerbate the problem.

If student loans end up being the next bubble after housing, who will pay the debt with so many being unemployed or underemployed? With a weak economy that is still recovering from the last recession, can we weather another hit? Most likely the working class will be the one that suffers the most in this event.

Most politicians fail to realize that there needs to be a well-educated workforce for the U.S. economy to continue to stabilize and compete in the global economy. If education is not affordable, the U.S. can never be competitive.

According to the 2010 report, “Education at a Glance 2010” by the Organization for Economic Co-operation and Development, out of 18 industrialized countries, including Japan, Poland and other former Soviet-bloc states, the U.S. had the lowest graduation rate. But some of these countries have a different approach to higher education than the U.S., which explains their success for having a larger pool of college graduates as well as a stronger economy.

Denmark and Sweden are two countries that offer free higher education for their citizens. Although they have a higher percentage of income tax, the collective ideology as opposed to individualistic ideology has allowed people to embrace a smaller paycheck. There is fear in our society to see a higher tax rate affect our paycheck. But we must realize that the frightening prospect is an under-educated populace and a more pervasive, powerful corporate world.

Working class people are not the ones that benefit from having smaller taxes. Corporations reap the rewards and leave lower income citizens holding the baggage of a failed society. The
corporate income tax is 12 percent, which is the lowest in 40 years according to The Wall Street Journal.

We don’t need to lessen the burden for those in power. Instead, we need to have a well-educated population that can give back to our society.

Free higher education in the U.S. is possible, and raising taxes would make higher education free. It’s a somewhat simple solution. It’s also imperative that the government provides for their citizens when the individual is not able to provide for themselves.

If this education problem isn’t sorted out by the nations bickering legislators, we may just start seeing trans-national corporations (Chinese or Brazilian ones perhaps?) setting up shop on U.S. soil and employing our under-educated and under-employed youth for pennies on the dollar. The irony of that, wouldn’t be delicious.