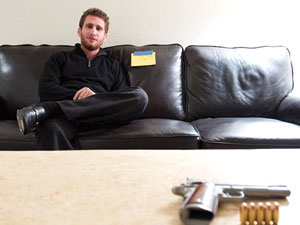 The pain wouldn’t go away even after weeks of physical therapy. In fact, it just kept getting worse.

The sensation began spreading from his shoulder down to his right arm all the way to his fingertips. Slowly, it reached his right thigh. Putting on clothes, laying down, taking a shower, and even the touch of air on his skin became unbearable.

Complex Regional Pain Syndrome is a rare but chronic condition that can affect any part of the body, according to the U.S. National Library of Medicine. The syndrome has no cure and treatment is in the form of pain medication.

Back in 2006, a then full-time student with a family business to uphold, Aaron Goldhammer, 25, a Cal State Northridge alumnus and co-founder of CSUN College Conservatives, was diagnosed with the syndrome. After dislocating his shoulder that year for the third time during a water polo game, Goldhammer quickly began physical therapy sessions like he had done before.

But this time was different. With the pain getting worse, he decided to visit specialists, take X-rays and MRIs until doctors concluded he had this rare syndrome.

“I’m not the type of person to accept failure,” Goldhammer said. “My mindset: I would keep going until I physically couldn’t anymore.”

Twenty-four specialists, dozens of tests, and nine to 10 different prescriptions at any given time, 24/7.

Two years after his diagnosis, Goldhammer visited Israel through the Birthright program, which gives young Jewish adults free peer group trips to connect with their roots.

Coming from a family of Holocaust survivors, Goldhammer said he always had a connection with Judaism. He went on the trip and visited the Western Wall in Jerusalem in 2008.

“I walked up to the wall, touched it, and immediately felt the energy. I prayed and I promised God that if He healed me, I would come to Israel and serve in the army. I kept it a secret. Nobody knew about my plans,” he said.

Two more years passed as Goldhammer tried to continue with a normal life, but then in September 2010, on the first morning of Rosh Hashana, the Jewish New Year, he woke up and the pain was completely gone. It was a miracle, he said.

“If you were a secular individual, you’d probably say the doctor made a bad prognosis,” Goldhammer said. “But all signs of the syndrome that had been there before disappeared when I got scanned again.”

He began weaning off the narcotics, afraid of physical withdrawal and the possibility of the pain returning. After a month, he was off of the medications with no pain.

Just a few weeks ago, Goldhammer revisited the Western Wall for the first time in four years.

Last time he prayed for a miracle, this time he thanked God for the one he was given.

“The reason I chose to make the promise I did was because I knew it was the biggest thing I could give in return for my health. It meant giving up my job, money, my future at the family business, the nice car, the comfortable lifestyle and my family,” he said.

Goldhammer finally told his family about his plans when he got back from Israel. They were shocked and cried at the thought of losing their only son, but they understood he had made his decision for the right reasons.

After weeks of training and rebuilding his body, Goldhammer plans to leave for Israel by the end of March. He said leaving his family will be the hardest part, but the money and luxury of living comfortably doesn’t mean anything to him anymore.

“I realized the things I was striving for were so trivial,” Goldhammer said. “Who are we at the end of the day? Are we our bank accounts or the cars we drive? The money we have? I’m going to be a soldier for Israel and I couldn’t even walk before.”