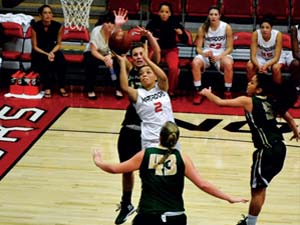 “I was excited, but our coaches really prepare us for things like that and they push us to limits. So when it came to the overtime I feel like we were in better shape,” said junior guard Haley White, who scored a career-high 21 points off the bench in 35 minutes of play.

Sophomore guard Janae Sharpe gave Northridge an early lead (2-0) with an easy layup, capitalizing on a steal by sophomore guard Ashlee Guay within the first minute of play.

The Matadors lead lasted a meager 13 seconds as Cal Poly tied the game on their next possession. Northridge was forced to play catch up throughout the game, trailing by as many as 12 late in the second half.

Playing into the Mustangs up-tempo offense, the Matadors made mistakes early. Passes went awry, CSUN was unable to achieve penetration into the paint and it couldn’t stop a potent Cal Poly offense.

“In the midst of rotation, (Schlemer was) getting the ball or getting offensive rebounds,” head coach Jason Flowers said. “We definitely have to sure up some things on the defensive end.”

CSUN went into halftime trailing 35-30. CSUN shot 26 percent on three-pointers in the first half, making 4-15.

During the second half, Northridge pushed back on Cal Poly. No longer settling for three-point shots, the Matadors racked up points in the paint.

“We were just rushing in the beginning, while in the second half we were thinking about our plays and moved the ball better and driving and make good passes,” freshman forward Marta Masoni said. “We were not rushing the plays.”

Trailing by as many as 12 in the second half, CSUN was down by 10 with under four minutes remaining. A 10-0 run, capped off by sophomore center Camille Mahlknecht’s basket with 28 seconds left sent the game into overtime.

Feeling confident going into the second overtime, Northridge outplayed a Cal Poly team that had been running the pace of the game.

Three-pointers from Masoni and sophomore guard Janae Sharpe put the game out of reach, extending the Matadors lead to 10.

The Matadors held the Mustangs to four points in the second overtime.

Though Northridge defeated the Mustangs, Flowers is already thinking of improvements.

“Every game does count, but it’s a marathon,” Flowers said. “It’s getting better every single day, every single week, so that you know the first week of March you’re playing the best basketball you can play.”