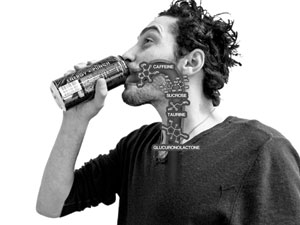 CORRECTION: The information regarding the sales of 40,000 Rockstar energy drinks was provided by the University Corporation, not the University Student Union, as stated in the article.

More than 40,000 Rockstar energy drinks were sold on the CSUN campus in 2012 alone, according to sales data provided by the University Corporation.

Ermine Khacheryan, 25, senior health science major, said she feels as if she has an irregular heartbeat after drinking Rockstar Energy drinks on an empty stomach.

“When I drink it without eating, I feel like my heart is going to stop, like it’s not beating regularly,” Khacheryan said.

Reports by the Food and Drug Administration publicly released in October 2012 showed leading energy drink products such as Rockstar, Monster Energy and 5-Hour Energy having involvement in multiple incidents of injury including spontaneous abortion (miscarriage), convulsions, cardiac arrest and death.

Rockstar in particular was responsible for hypertension, vomiting, anxiety, throat lacerations, arterial disorder (heart blockage) and psychotic disorder, according to the FDA.

“We would act like it’s a drug,” Khacheryan said about herself and a friend. “We (would say), ‘We’re getting withdrawal symptoms, should we go get some?’ because it feels like a high.”

According to theJournal of American College Health, due to the higher concentrations of caffeine in energy drinks, the “potential for addiction exists among those who regularly consume them.”

“Last year I was addicted to it,” Khacheryan said. “I drank it every single day.”

Additionally, the number of emergency room visits involving energy drinks doubled from 10,068 visits in 2007 to 20,783 visits in 2011, according to the Substance Abuse and Mental Heath Services Administration.

“You have to look at what the ingredients are in them,” said Terri Lisagor, chair of the department of family and consumer services and college of health and human development.

Consuming the highly-caffeinated drinks may cause various health complications including sleeplessness, irritability, heart palpitations and increased blood pressure, according to a study by Rutgers University.

“With coffee, you hear about people drinking coffee or having their soda to give them the feeling of higher energy; it’s just actually a stimulant,” Lisagor said. “Too much is going to over-stimulate the central nervous system.”

Elizabeth Hernandez, 21, junior psychology major, said she avoids energy drinks due to her concerns with these health risks. Instead, she chooses to drink coffee several times a week when she feels too tired in the morning.

“Whenever I see them on special, (I buy them),” said Bryan Zamorano, 20, sophomore microbiology major, even though he knows people who have experienced the negative side-effects of consuming energy drinks in excess.

“My mother (got) kidney stones from drinking a lot of Red Bull,” Zamorano said.

Lisagor, recognizing the addictive qualities of caffeine, added it also depends on the rest of an individual’s diet.

“It’s not like something like methamphetamine where you’re going to get addicted right away,” Lisagor said. “I guess it all depends how much are you drinking, what else are you having.”

The results of the National College Health Assessment, a nationally recognized survey conducted biennially by the American College Health Association, showed staying well-rested was a common issue among a random sample of 10,000 CSUN students in 2011.

According to the survey, 39 percent of students rated their stress levels within the past year as more than average, 43 percent felt dragged out, tired or sleepy during the past week while only 11 percent said they had no problem with sleepiness during daytime activities.

Lisagor said the best way to avoid relying on caffeine is to plan ahead based on when one has time to exercise and get a full night of sleep.

“If you do that, then overall, your body will be healthier and better able to learn (and) to work,” Lisagor said.

Representatives from Monster Energy and Rockstar were not available for comment.