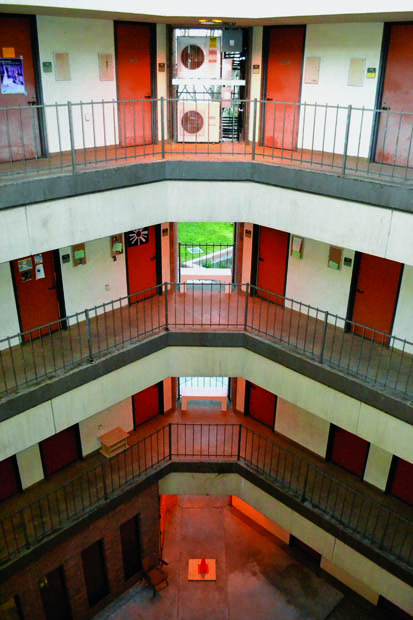 After a leaking roof and inconsistent heating and cooling system became problematic late last year, teachers and staff are welcome to a newly-repaired Santa Susana Hall.

According to Ken Rosenthal, manager of construction services for CSUN’s facilities and planning department, the roof had been leaking, and the Heating Ventilation and Air Conditioning (HVAC) system had to be replaced on the fourth floor.

“The reality is, it’s one of those buildings where we are aware there have been multiple issues,” Rosenthal said.

Last fall, the Facilities and Planning Department undertook the task of addressing some of the worst problems in Santa Susana Hall on the south side of campus across from the Matador Bookstore complex.

The recent rainfall did not penetrate the new roof according to Herman Debose, sociology department chair, whose Santa Susana office was affected by severe water leaks last year.

Other offices on the third and fourth floors that had also once experienced indoor water damage have stayed dry.

Faculty on the fourth floor said they are enjoying their new HVAC system. Each office now has its own thermostat, so occupants can control the temperature more effectively.

The first, second and third floors, however, are still operating on the original, outdated HVAC system, Rosenthal said.

Debose added that thermostats in some offices control the temperature in others, and the inclement situation is compounded when staff members open doors in order to increase visability in the hallways.

“Most people don’t realize it’s all interconnected,” Rosenthal said. “They don’t have a dedicated unit for each office. It’s one big system.”

Another recent change in the building is the sudden removal of the venerable system of ivy that had been growing up both of the interior courtyards’ four floors for years.

Santa Susana Hall is designed with two courtyards connected by a section of hallway containing offices and the building’s elevator. The boundaries of each courtyard are made up by the offices, lined by walkways with a railing at the interior edge. The vines grew up the inside of each of these courtyards in the corners and around the railings.

Without the greenery, the balconies are more exposed, and the railings are left uncovered.

“It looks like a prison now,” said mathematics professor Mark Schilling, whose office is on the fourth floor.

Debose said he felt the removal of the vines would allow more light to get through into the building.

The weight of the plants caused cracks to form in the old railings and provided refuge for vermin like rats or insects, Wang said. They determined it was safest to remove the vines rather than to let the situation continue.

He added plans are underway to improve the looks and functionality of the building.

Planned improvements include additional seating on the first floor, new railings that are up to current code and doors with larger windows to improve visibility and make the space more inviting. Wang added the project could proceed as early as this summer.