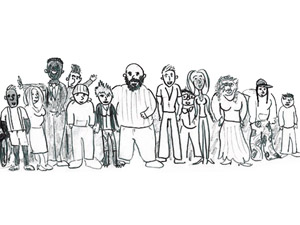 Our country entered 2013 with more equality for LGBT or “queer” Americans than we did at the beginning of the new millennia. Don’t ask, don’t tell no longer bans outwardly queer soldiers from serving. Ten states have legalized same-sex marriage and the Defense of Marriage Act (DOMA) is likely to be ruled unconstitutional by the Supreme Court in March, with public support. Our president is the first to publicly express his support for the equality for all, no matter who they love or share intimacy with.

Though attaining the rights to marry and to serve in the military for all Americans are imperative steps toward creating a more egalitarian future, we have a long way to go before it really gets better. Contrary to DOMA defense lawyer, Paul Clement’s claim that gays and lesbians are “one of the most influential, best-connected, best-funded, and best-organized interest groups in modern politics, and have attained more legislative victories, political power, and popular favor in less time than virtually any other group in American history,” queer people are still often stereotyped and left out of important cultural and political processes.

The goal of discussing matters of LGBT issues should not merely be to procure national “tolerance” for those who do not identify as heterosexual; rather, it is time that we start viewing human sexuality in more complex terms than merely gay or straight.

Sexual identity is largely a modern concept. The term “homosexuality” was not coined until the 19th century and people’s sexuality was not politicized the way it is today. That does not mean, however, that the tendency for human beings to have emotional, spiritual and physical attractions and connections with those of the same sex, either momentarily or for life, has only existed since the 1800s. Scholars and historians note discussions or questions of same-sex intimacy throughout many cultures through the ages.

In 1948, Dr. Alfred Kinsey and his colleagues developed something called the Heterosexual-Homosexual Rating Scale or the Kinsey Scale, in order to “account for research findings that showed people did not fit into neat and exclusive heterosexual or homosexual categories.” Kinsey’s research shows that simply labeling someone a “homosexual” or “heterosexual” is often misleading.

According to the Kinsey Institute, many people did not always adhere to consistent sexual behaviors or preferences across time.

“Though the majority of men and women reported being exclusively heterosexual, and a percentage reported exclusively homosexual behavior and attractions, many individuals disclosed behaviors or thoughts somewhere in between,” stated the institute’s website.

Though Kinsey’s work provides a basis to ask these excellent questions, his work was limited, as he did not account for variances in gender identity, such as transgender or intersex people, or for asexual people who still have romantic or emotional preferences. Nor did his studies explore how one’s race, class and sexual/gender identity could make uniquely different experiences for some queer people than others, creating a kind of social hierarchy even within the queer community.

It may seem like much to ask for the public to digest, but it is important to learn about sexuality for both straight and queer Americans alike. As our society becomes less and less heteronormative and heterocentric, new identities and societal expectations may emerge, create new challenges or solutions. It is important to creating fairer and better public policy, culture and art.

Because of all the political and social progress made so far, queer Americans and their allies can be hopeful for a fairer future. According to the Gay and Lesbian Alliance Against Defamation, 48 regular LGBT characters are on television today, an increase from 35 regular characters in 2009. And although gay men are still represented more than lesbians, bisexuals or transgender people, the diversity even within the queer character group is increasing. More businesses and corporations are rooting for the equality of queer Americans today than ever before. Marginalized living for queers is disappearing, slowly but surely.

Hopefully someday we will have exhausted our recipe for the queer “alphabet soup,” and sexual and gender orientation will not need to be turned into a public identity to defend. Perhaps one day it will be just as “normal” to be gay, lesbian, bisexual, transgender, pansexual, intersexual, queer, curious or questioning, as it is to be “straight” in today’s age.