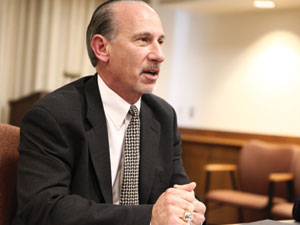 Northridge is without an athletic director since Rick Mazzuto stepped down from his position last November. He was replaced by Associate Athletic Director Ashlie Kite, who took over his duties.

During Weiner’s time at UCLA, the athletic program won 14 national championships and various other conference championships. Weiner was also a part of the negotiations that resulted in a 20-year agreement between UCLA and the Rose Bowl.

Lucas has a familiarity with CSUN’s athletic department, having previously been the interim director of athletics from November 2005 to August 2006. Her vision for CSUN athletics is to elevate it to the next level.

“I really believe that (CSUN’s sports) program could be in the top-third of the Big West Conference,” Lucas said. “Do we have a lot of work to do? Absolutely. Do we have a foundation? We have part of one in a variety of areas. Do we want to build on that? That’s what this next phase is all about because we cannot just say we want to do that. We have to back it up with actions and building blocks.”

Weiner started out with a statement expressing his positive outlook on CSUN athletics, as well as his background and work experience.

“I think there is a great energy about things moving forward,” Weiner said. “A lot of people are optimistic about where the university is going, where athletics are going. Athletics can create some good opportunities and integrate itself into the mission of the university, and I’d like to be a part of that.”

Weiner outlined a plan to return Northridge sports back to prominence, spearheaded by wide open communication between him and the coaches. An evaluation process will take place before he moves forward in any aspect.

“Radical change, or change of any sorts, doesn’t turn on a dime,” Weiner said. “There is a lot of work to be done but putting a plan out there is great for staff to know that there is light at the end of the tunnel.”

As CSUN’s athletic director, Lucas said she would aim toward involving the surrounding Northridge community, on-campus community and students.

“(We) need to help them understand what the vision is for the (sports) program so they will buy into that and are excited about it and believe in it,” Lucas said. “Because they are going to be our best ambassadors moving forward.”

Hoping to engage the faculty more, Weiner hopes to hold “Academic Days” at sporting events, where faculty would be recognized.

Head of the search for CSUN’s new athletic director, Dr. Michael Neubauer, director of the liberal studies program, echoed these sentiments when describing what he is looking for.

If Weiner is hired, he would be coming from a larger athletic program at Pac-12 member UCLA to CSUN, which belongs to the smaller Big West Conference. However, Weiner doesn’t believe that it will impact his approach to resurrecting the athletic program at Northridge.

“You are hired as a person, you are hired for the attributes that you bring to the job,” Weiner said. “My strengths are that I can build a team, I’ve directed large projects, and I’ve been at the highest ranks of an athletic department before. If you can extrapolate those to another place, and do it in an admirable way, that’s what they’re hiring you for.”

CSU Bakersfield Athletic Director Jeff Konya was an original candidate for the position, but withdrew his name earlier this week. He stated Northridge’s tremendous upside was part of his decision, but ultimately decided to stay at CSUB. He was rewarded with a five-year contract extension.

“In
final analysis, my head and my heart ultimately guided me to stay at
Bakersfield due to the fact that we are in clear growth mode and are on a
definite ascent on so many different levels of the athletics
department,” Konya said. “I feel the CSUB Roadrunners are poised to do great things in the years to come.”

Additional candidates may visit Northridge during the middle of February.