Bring on the Harbowl predictions 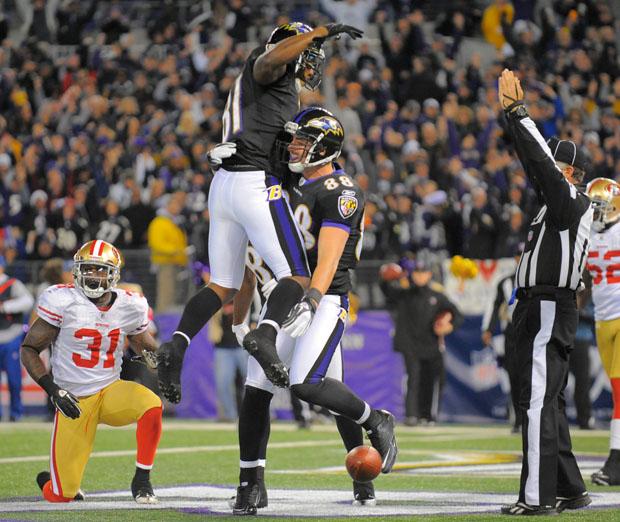 After following the postseason games and seeing the way the San Francisco 49ers offensive line has dominated, I predict that they will pull off their first Super Bowl win in 18 years this Sunday.

About halfway through the season, coach Jim Harbaugh benched starting quarterback Alex Smith, who was having the best year of his career, and sent young Colin Kaepernick into the fray.

At the time, it seemed an odd and even controversial choice, but Kaepernick has won over fans with his old-school running game and killer long-distance passes. In a wild-card playoff game against Green Bay, he set the record for most quarterback rushing yards in any game with 181.

Then there is tight end Vernon Davis, who has also proven himself still useful recently. His postseason per-game yardage totals since 2011, account forthree of the five highest for a tight end in a single game.

Once the Niners offensive line gains momentum, they have proven to be nearly impossible to stop, being held under 20 points only four times. Their offensive strategy relies heavily on running the ball. It’s a perfect match for Kaepernick’s style of play, who can also easily hand off the ball to 1200-yard rusher Frank Gore.

San Francisco’s defense, ranked number four in allowing rushing touchdowns, may make it harder for Baltimore to run the ball, but that’s not Flacco’s game plan. San Francisco’s defense allowed only seven rushing touchdowns this season, less than half of Baltimore’s 15. When it counts, the Niners have the strength to keep the Ravens out of the end zone until the clock runs out.

Down by 3 with 30 seconds to go, Baltimore linebacker Terrell Suggs comes charging forward, barreling through the offensive line and aiming for 49ers quarterback Colin Kaepernick.

At the last second, Kaepernick dodges Suggs and spots Vernon Davis in the end zone. The football spirals through the air and sails straight into Davis’ hands.

Alright, I don’t have psychic powers, I can’t predict the future, but here are a few challenges that await the Niners as they try to bring home their first championship since 1994.

This game comes down to Kaepernick’s ability to escape Baltimore’s linebackers versus Joe Flacco’s ability to find Torrey Smith down the field for long completions.

When San Francisco stacks their defense in the box, they’re practically invulnerable to the run. This will force the Ravens receivers to run beyond the defense for long passes, one of San Francisco’s weaknesses.

The Niners defense will be too much to overcome for Baltimore running backRay Rice, while the quick legs of Kaepernick and running back Frank Gore will help keep San Francisco out front.

Superstar middle linebacker Ray Lewis, who recently announced his retirement after the season, is looking to end his career the way he started it: by bringing down Niners head coach Jim Harbaugh.

Lewis might feel as if winning would add another golden feather in his cap, but there are two other linebackers that are impact players.

NaVorro Bowman and Patrick Willis are key defensive players for the Niners,leading the team in tackles. Bowman was responsible for 149 tackles, while Willis accrued 120, more than Lewis’ injury-plagued season of 57 tackles.

Coming down to a defensive battle, this may be a game for the ages.

The events leading up to Super Bowl XLVII leave no room for doubt in my mind: the Baltimore Ravens will win their second championship in franchise history.

First of all, Joe Flacco is playing out of his mind. He has thrown for 853 yards, eight touchdowns and no interceptions in the last three playoff games. He led the Ravens to back-to-back wins against Peyton Manning and Tom Brady, two of the greatest quarterbacks to ever play the game.

Flacco’s through-the-roof passer rating of 114.7 and stellar clutch play, has shown that he’s gotten over the hump. This Sunday marks his first Super Bowl appearance, despite playing in four AFC Championship games since 2008.

While the San Francisco 49er’s may have an outstanding defensive squad, their main weakness is the deep pass, which Flacco excels at. The way Flacco is playing right now, there’s just no stopping him when he decides to gun it down field to either Anquan Boldin or Torrey Smith; and San Fransisco’s defense won’t catchup.

Secondly, there’s Ray Lewis. Who better to have on defense when facing a run-happy quarterback?

Yeah, 49ers QB Colin Kaepernick broke a record by putting up a ridiculous 181 rushing yards in one game against Green Bay. There’s no way Lewis and fellow linebacker Terrell Suggs will allow that to happen again, as they’ll be pressuring and shadowing him all game long.

Returning from the injury and facing retirement after this season, Lewis has played his heart out, totaling 44 tackles throughout the playoffs so far (14.6 per game).

This Sunday’s Super Bowl showdown was already framed the minute Ravens free safety Bernard Pollard smooshed Patriots running back Stevan Ridley. Every sportswriter in the country did a collective leap out of their chair and the Harbowl was born.

While rival brothers on the field seemed to be fated as a showdown between Eli and Peyton Manning, the battle between Jim and John Harbaugh on the sidelines seems almost as good.

Easy money is on the experience and team building of older brother John and his longer tenure with the Baltimore Ravens. Virtually nothing beats a well-established and well-organized team of veteran players. The Ravens have had a successful run under John’s five years of leadership, making the playoffs every year and reaching three AFC Championship games, finally winning this season.

The 49ers lack of experience is made up for with vicious tenacity. Jim has established his leadership skills in his two years as an NFL head coach. Last season his Niners would’ve had their first Super Bowl appearance in 15 years, if not for a muffed punt at the end of the NFC Championship game.

Jim’s decisive move to keep mid-season quarterback replacement Colin Kaepernick, after Alex Smith was eligible for return, presented the classic quarterback controversy scenario. Sticking with Kaepernick was reminiscent of Patriots coach Bill Belichick, and his decision to keep a young Tom Brady in over established veteran, Drew Bledsoe. That paid off for the Patriots and I expect it to pay off in spades for the 49ers.

The Ravens and their experience are no match for the 49ers and their offense. The Niners are on a roll, and Kaepernick will be the deciding factor in the Super Bowl match-up. It’ll be close but the Ravens aren’t a team of destiny like they proclaim. San Francisco has the momentum and no amount of Ray Lewis crying can stop them.