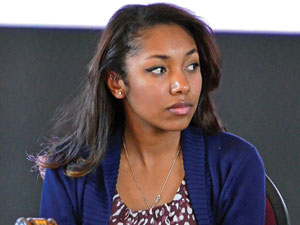 Elections Chair Breanna Kyle made a special presentation asking senators to participate in A.S. election events. Kyle requested that Senators advertise the election and talk to possible candidates about the benefits, responsibilities and experiences that Senators enjoy during their terms.

President Sydni Powell agreed that it was important to participate in the elections and advised the Senators to also look for their own replacements if they were not returning next semester. She also recommended they find constituents to nominate in order to fill committee seats.

Senator Talar Alexanian discussed admissions for the upcoming fall as CSU system has experienced a consistent spike in the number applicants. CSUN has had approximately 29,616 first-time students and about 7,000 transfer students.

Alexanian said that CSUN may be “slightly impacted” for the incoming freshmen, but not the transfer students.

The Social Work Society and Advising Resource Center/EOP both received money from the Unassigned Contingency fund, which is money that was not used in last year’s budget.

The Social Work Society plans to use the money to pay for speakers during their Diversity Day event. The Advising Resource Center/EOP is planning to use the funds for their Majors Fair. This event is also co-sponsored by the University of Southern California, who donated an additional $1,000.

The Deaf CSUNians collected money as well. A.S. allocated $300 for their Miss Deaf CSUN pageant. The Finance Chair, Kevin Lee, noted that the organization already has funds from their Mr. Deaf CSUN pageant to use, as well as the profit made by selling tickets to the event.

The Chicana/o Graduate Student Association received $800 for their event, Spiritual Activism: The Intersection of Faith and Justice.

Finally, A.S. approved a transfer of $15,000 worth of unused funds from Outdoor Activities, to sports club student wages. They also chose to allocate an additional $4,000 to the Sports Club Council Budget, which will pay for new sports clubs’ team jerseys, travel and other assorted expenses. All allocations were passed easily, with no opposition.

Before adjourning, the Senate nominated new representatives for the Elections Committee, Environmental Affairs Committee, and the Judicial Court.