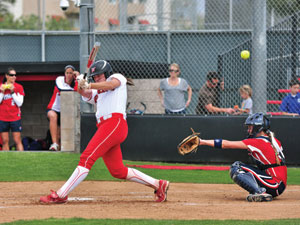 The Matadors are looking to improve on last year’s struggles with a new positive outlook on their 2013 season that kicks off Friday in Arizona.

Third-year head coach Tairia Flowers has been working hard with the team on not just physical strength, but on mental toughness on and off the field.

“We are talking a lot about their self talk, heavy confidence in sports is huge,” Flowers said. “So we have attacked it from the angle that we just need to be more aware of the thoughts that are going through their minds, helping them control them, and how to approach the game.

The Matadors had a tough year in 2012, finishing 10-42 overall and 5-16 in the Big West Conference, but are looking to make an impact statement right away.

“There is a lot of room to improve from last season, but I think that the mental part is definitely going to give us that head start,” Flowers said. “We are working day in and day out just getting better physically and working together as a group.”

According to the Big West preseason coaches poll, Northridge is predicted to finish last, with Hawai’i and Long Beach State contending for first.

Senior catcher Mikayla Thielges, who is entering her senior season after leading the Matadors in 2012 with seven home runs, a .252 batting average and 22 RBIs, hopes to make her final season one to remember.

“I am most excited for our first game to come out and get that first win,” Thielges said. “The more work you put into it the more you are going to get out of it. I am going to work as hard as I can this season.”

With many of last years players returning, a good core has been established for the Matadors. Five new players bring strong personalities, energy and new talent that Flowers hopes to have an impact right away.

“I think we have a good group that is jelling and we are understanding that we have to play as a team,” Flowers said.

Among the returning players expected to make an impact is senior pitcher Mia Pagano.

Pagano, who is returning to the lineup after foot surgery in the Summer, led her team last season with a 3.44 ERA and an 8-19 record, earning All-Big West Second Team Honors for 2012.

“I am really excited, this is my first year in a while where I have been uninjured,” Pagano said. “So I am excited to put my best foot forward for my senior year.”

Pagano and Thielges are looking to lead the team with their four-year bond as a pitcher and catcher duo, with the help of their fellow four seniors competing in their final season.

“Our strength is our chemistry this season, which helps us build our defense and offense,” Pagano said. “We are able to pick each other up when we need to and when we are on fire we are on fire.”

The Matadors open their season with multiple tournaments throughout February, and won’t have their home opener until the first week of March.