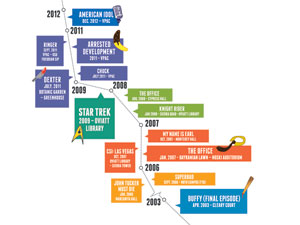 With dozens of movies, television shows and commercials having been filmed on the CSUN campus in the last decade, the university has raked in hundreds of thousands of dollars by making itself available for on-location shooting.

Recently, television show “American Idol” filmed its “Hollywood Week” of auditions at the Valley Performing Arts Center during winter break, adding to the growing list of productions that have filmed on campus.

Sophomore geography major Johnathan J. Powers said he believes that having a show film at his school is almost like being a part of history.

“To figure out a show that you actually like was filmed here is pretty cool, and when you see something you can relate to, it makes you want to watch it more,” Powers said.

According to Heather Cairns, associate director for administrative services for the University Corporation, the 2011-2012 fiscal year has brought in the most money the school has ever seen from filming.

“American Idol was the largest revenue generator since (the University Corporation) has been on campus. Nothing has been comparable,” Cairns said, who also works as the facilities, trademark and licensing manager.

Next to American Idol, the second biggest money making project to film at CSUN was Bring it On: Fight to the Finish, which grossed more than $115,000 for the university after shooting at multiple locations on campus during a two-week period.

The campus also received $50,000 from the filming of Star Trek in 2009. The movie shot for four days at two locations, including the Oviatt Library, which they used for the “command station” in the film.

Popular television shows such as “The Office” and “Dexter” have also filmed at the university.

This year is on track to be more successful than last considering “American Idol” has produced more money than any other shoot, Cairns said. However, the exact amount received is currently confidential.

The licensing department had a 15 percent revenue growth from the previous year, with about 50 percent of it coming from filming, roughly $360,000, Cairns said.

She added she believes that the CSUN campus is very “film-friendly,” and it is necessary and beneficial for the university to provide facility rentals, particularly because of its proximity to Hollywood.

Senior Central American studies major, Delia Morales, said she agrees it must be CSUN’s the distance from studios that makes it popular for filming.

“I watch ‘The Office,’ and I think it’s cool that it was filmed here. It does make me wonder where the money goes, though,” Morales said.

The money made from filming goes directly to the university, Cairns said.

“American Idol” had been looking for a new home for Hollywood week which was previously held in Pasadena. One of the reasons they were pleased with the VPAC was that it had the smaller rehearsal spaces for contestants to disperse into at the end of the night, Cairns said.

She added the VPAC is quickly becoming the most sought after filming spot on campus.

Since it started allowing filming there in 2011 with the television pilot for “Grace,” the VPAC has supplied settings for several others shows including, “Chuck,” “Ringer,” and in October, “Arrested Development,” which brought in $23,000 in total revenue. The facility receives several requests a week from filming prospects.

“One thing that’s been very popular are lot of car commercials and car photoshoots, something we never expected. We have done at least eight to 10,” Cairns said.

Dodge, Honda, Cadillac, Lexus, Nissan, Toyota and Volkswagen have all done either commercials or photo shoots outside of the VPAC.

“(Filming) helps to enhance the visibility of CSUN and the VPAC venue (as well as) gives us exposure to a wider audience. It also creates another monetary stream for CSUN,” said Dean Porter, marketing director for the VPAC.

“We don’t often broadcast that something is necessarily being filmed here, but we are getting more and more in that direction where we would like our name out there,” said Cairns, adding that she hopes “American Idol” will announce they are at CSUN when the episodes air to showcase the campus.

CSUN students can even participate as extras through the licensing department for certain productions that request it.

“I have seen a few episodes (of American Idol) but, I don’t watch the show regularly. It’s exciting that such a popular show was filmed on our campus,” said Nicole McBride, senior English major. “I may just try to catch the Hollywood week episodes.”