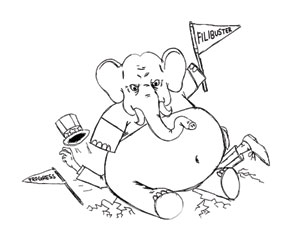 The Filibuster lives on. Bad news for Democrats, and bad news for anyone who wants anything to get done in the Senate in the next four years.Democrats in the Senate have been fishing for filibuster reform ever since the Republican minority started to use the stalling technique excessively at the start of the Obama administration. When Democrats thought they might be at the brink of a monumental change in filibuster procedure, Democratic Senate Majority Leader Harry Reid decided to play nice with Republican Senate Minority Leader Mitch McConnell last week and only made minor changes to the use of the filibuster. This will prove to be a major set back for the Obama administration.The filibuster is a delay device in legislation that is supposed to allow for open discussion and debate about a bill, but in reality it’s a tactic utilized by the minority party to stall a vote or outright kill it. The filibuster allows for unlimited debate on a bill unless three-fifths of the senate or 60 votes, end it. Gregory Koger, author of “Filibustering: A Political History of Obstruction in the House and Senate,” before the 21st century, wrote filibustering was only used in extreme cases, and required the people or person delaying the vote to talk endlessly until exhaustion kicked in. Since the introduction of the “silent filibuster,” where one only had to threaten to use a filibuster in order to hold up legislation, there has been a drastic spike in filibuster use.While the notion that every Senator has a voice and a chance to debate sounds egalitarian, the fact that it only takes one member of the minority to procure a filibuster and a super majority to end it, is simply unjust and stifling to the democratic process.Sen. McConnell is notorious for his relentless, obstructionist leadership. On the senator’s website, McConnell has repeated references to legislation his Republican caucus and their successful attempts at repeatedly stopping democratic legislation- often, appearing to stop it just in opposition to Obama’s presidency. Additionally, since 2007, when Republicans lost the majority in the Senate, they have used or threatened to use nearly 400 filibusters to block legislation and judicial appointments, leaving the Senate at a standstill and the American public frustrated that nothing substantial is getting done. In a 2010 Pew Research Study, only 26 percent of people surveyed knew it took three-fifths or 60 votes of the Senate to end a filibuster. Considering most of America is unaware of the filibuster impact in the Senate, Republicans have the perfect system: block everything progressive through filibusters, and let the current administration and the Democratic majority take the blame for the stagnation in the Senate and consequently, the nation. Liberals have been hoping for sweeping reforms to the filibuster, many wanting to rid the Senate of the option to filibuster at all. But the results of the recent negotiations were minimal.According to Mother Jones, the recent compromise will make the debate process for new legislation easier for the Senate, while “speeding up the process of voting to confirm the president’s judicial nominations.” Supporters of the filibuster, generally Republicans, would argue that when Democrats take their turn as the minority in the senate, they will want the filibuster. They claim it’s a way to protect whoever is in the minority and allow for them to have some say. However, when a governing body is as divided by party as the U.S. Senate currently is, nothing can get done and the nation remains in limbo. There is an abuse of the filibuster and it’s making a mockery of the democratic process. It has come to the point that winning senate seats and obtaining the majority means nothing. Democrats currently have 55 seats in the Senate, which include two independent senators that caucus with them. Other countries such as Canada, Australia and the United Kingdom have the ability to bring about a Filibuster, but the abuse of the filibuster is famously in America.Republicans have also said they need the filibuster because Reid does not allow them to make amendments, however the new changes will allow opponents of a bill to make two amendments. Perhaps that is why “the reform” was overwhelmingly approved. The changes were broken into two pieces and were passed by a 86-9 and 78-16 vote.Not included in the deal was the return to the ‘talking filibuster’ that forced senators to remain speaking on the senate floor in order to prevent a vote, which actually forced the politicians to do some real work when justifying their filibuster.For now, no one will get to see teams of senators taking turns reading the phone book or the latest best seller to stall time and the stagnation in the Senate will most likely continue.