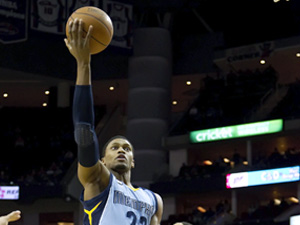 “Air Canada” is back in full flight in Toronto with the arrival of star small forward Rudy Gay.

Gay, along with center Hamed Haddadi, were dealt from the Memphis Grizzlies to the Toronto Raptors in a three team trade. It also sent power forward Ed Davis, small forward Austin Daye and small forward Tayshaun Prince to the Grizzlies, and point guard Josè Calderon, to the Detroit Pistons.

Speaking strictly from a financial standpoint, the Grizzlies did themselves a favor as they got rid of a contract that owed Gay $37 million over the next two years. They put themselves under the salary cap and are now in a position to land a star free agent this summer.

Aside from the business aspect, this trade made plenty of sense on the court as Memphis improved its bench and strengthened its stout defense.

The Grizzlies were in fourth place in the Western Conference at the time of the trade, with a very deceiving 29-15 record. They were 12-2 in the months of October and November, and 17-13 since that time. Obviously on the decline, and considering the firepower in their conference, their chances of winning the first seed were slim to none.

One of the strengths for the Grizzlies is their defense, which allows only 89.5 points per game, good for best in the NBA. They improve that with a proven wing defender in Prince, and an active shot blocker in Ed Davis off the bench.

The Grizzlies weren’t going to make noise in the playoffs with who they had, and Gay was going to be traded sooner or later, so their moves made sense. Memphis saved money, and got a good mix of experience and promising young talent moving forward — which are typically signs of rebuilding.

The Raptors also made some key roster improvements this year. Adding a prolific scorer in Gay, they now have one of the most dynamic backcourts in the league. Along with Gay, point guard Kyle Lowry and shooting guard Demar Derozan look to pose matchup problems against opposing defenses.

Sitting at 17-31, the Raptors are currently 11th in the East, and playoff chances for them are dwindling. However, with power forward Andrea Bargnani back and a full training camp to build team chemistry, the Raptors will definitely make some noise in the East next year. “Air Canada” is back, eh?

With every three team trade, there is almost always a loser. In this case, it’s the Detroit Pistons. They received the expiring $10.5 million contract of Calderon, who currently can not play now due to Visa issues.

Even if he could, he is not the savior for the Pistons. They are absolutely awful and their only way of obtaining players is through the draft and through trades. Having salary cap room is rendered useless, because they are incapable of recruiting players through free agency. It’s Detroit.

The only positive outcome I can see for Detroit is the development of star guard Brandon Knight. Calderon’s success in the league and veteran leadership can be very valuable for Knight as he climbs the ladder to elite status.