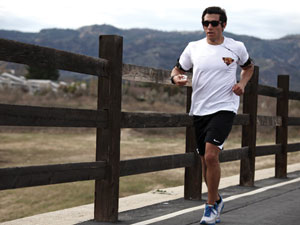 While most people are still asleep as the sun creeps up over California’s skyline on weekends, the opposite is the case for runners training for the LA Marathon.

By 7:30 a.m. on Saturday, about 60 people (mostly CSUN students, faculty and alumni) converge at Granary Square in Valencia in preparation for the marathon, set for March 17.

“Once you’re out here it’s fine – everyone is psyched, everyone is pumped up. But to wake up at 6:45 a.m. on Saturday, the only day you get to sleep in, it’s a little bit of a challenge,” said Chloe Thornton, a kinesiology major at CSUN.

“If I’m going to do something to stay healthy and I’m going to do it anyway, why not take people along for the journey?” he said. “It’s certainly more available if you don’t charge.”

Participating in the marathon and decent shoes costs more than $100 each, and gas money to drive to Santa Clarita is another expense, Loy said.

“If you’ve got the knowledge, time and expertise to do something, then why not share?” he said.

Whether it’s raining or shining, windy or chilly, runners travel miles and miles on foot through the paseos of Santa Clarita. Loy chalks a multi-colored map of the trail on the parking lot of Granary Square so the group knows where to go. He also chalks arrows on the trail itself, pointing runners in the right direction.

The goal for participants isn’t necessarily to achieve a certain time, but to complete 26.2 miles on foot.

“That’s the objective,” Loy said. “I don’t care what speed you run at, because the goal of completing it is a goal in and of itself.”

The group only trains together on Saturdays, so they are responsible for putting in miles the rest of the week on their own. Even so, Loy sends words of encouragement via email to everyone throughout the week.

“Sometimes you feel like you don’t want to go on a run, and you’ll get one of Dr. Loy’s emails saying, ‘You better be doing your mid-week training!’ He pushes everybody,” Thornton said.

After seven years of training about 125 people, this will be the final challenge Loy organizes. After March, he will complete his fourth and final long run in April in the Boston Marathon.

While Loy prepares to retire from long distance running, some of the trainees under his wing are preparing for the first marathon of their lives, like Matthew Carroll, a CSUN alumnus.

“I don’t know if I would actually run this if I did it at my house,” he said.

For Carroll, the sense of community and being around a great group of people are reasons he comes out more than 40 miles away on the weekend.

Some participants have already completed one or more marathons but are back for another long run.

“I think it becomes addicting,” said Brenda Palomino, a CSUN alumna. “The last marathon I ran I said, ‘This is the last one I’m going to do.’ And I’m back here just looking forward to the challenge and learning from it.”

As March approaches, the runners add two miles to their workout each week until they hit 21 miles. Afterward, the training  eases, composed of rest days and easier runs until the marathon.