Don’t complain; be the change 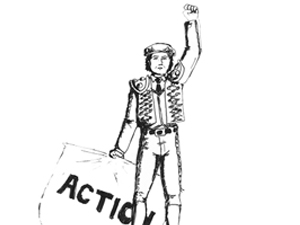 At most student rallies where chants echo, we hear “Student-Power!” repeated until throats are coarse. Making noise and drawing attention to campus issues is important, but increased awareness does not directly change policy or gain funding.

In order for students to contend for power in our current economic system, we have to recognize the politics that allow access to resources. At CSUN, students need to form a club and follow rules in order to get some of our own money back to fund events or actions. A corporate structure does facilitate the actions necessary to govern large sums of money, but the fact that the Associated Students, our student government, is a private corporation acting under the color of state law starts to blur the role of for-profit entities conducting business on public campuses.

On a larger level, increased funding of higher education through Proposition 30 was deemed the solution to the regular budget cuts and tuition increases that have plagued the California State University system over the last decade. This led much of the academic community to mobilize in support of the proposition.

However, the structural faults of an education system that is more concerned with the bottom line than the intrinsic value of knowledge will not be solved by throwing money at the problem. On the contrary, it encourages a neo-liberal privatization of public education.

Last year, Governor Brown marginalized the tenured professor by promoting online education and the new requirements that increase pension contributions from new professors. Nevertheless, the California Faculty Association, the union that represents professors throughout the California State University system, hasn’t mobilized a response that has gotten the public’s attention.

The dissenting academy has been hibernating because of material comfort and a bureaucratic system that stomps out radical intellectuals who speak out against a corrupt and incompetent political system. Instead, professors play politics in the academic senate while campus administrators play budget games that pit one department project against another.

Students don’t come with that baggage.

We have the ability to be free thinkers and challenge the status quo, but sometimes we are threatened with academic probation or told to worry about graduation under whispered breath. Even if students aren’t pressured to walk the line by campus administration, we haven’t had the resources or the organization to come together with one voice without being co-opted by the Democratic Party.

The large number of students, our consumerist tendencies, and our malleable worldviews make us easy targets for assimilation by well-developed political machinery.

The campus becomes a place of polarization when we accept the rhetoric of a two-party-binary. We get lured into a battle for more funding for education, which prevents us from acknowledging the fact that we have CSU administrators who make over $500,000, while adjunct professors make little more than a tenth of that. These administrators, campus presidents, and Board of Trustees are appointed by the Democratic Governor and approved by the Democrat controlled State Senate.

But at CSUs and UCs across the state, the local legislator is not beholden to the students at that specific university because they can assume that a large portion of students don’t vote, and many that do, don’t vote in that district.

Some students think of themselves as transient; on campus for a few years and then on to somewhere better. Students may register to vote in their hometown and not bother to re-register at their campus address, but that dilutes the electoral power of the student community.

Most people, especially students, don’t pay attention to local politics because of misconception that local government doesn’t impact their daily life. Unfortunately, this combination has usually produced a lower voter turnout in elections for the city council district that includes CSUN.

This leaves future generations of students underrepresented and allows the politicians of that area to avoid taking strong stances in support of public education. In fact, it allows the entire conversation to be trivialized into simple sound bites and rhetoric that plays into a broader Democrat versus Republican binary that marginalizes third parties and independent candidates.

We complain about inactivity in the government or how their decisions negatively affect our lives or the lives of our loved ones. But quiescence do not produce changes. Nor can we waiting for the world to change.

We need to realize that student power comes from voting together. Not only students on a single campus, but if students across campuses develop into an independent voting constituency, we have the collective ability to steer the American government away from war. After all, it was the youth that pushed the 1960s civil rights agenda that we now seem to take for granted.