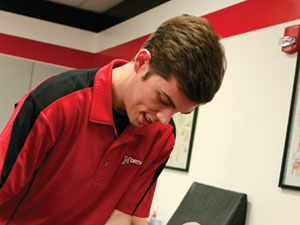 As a young skateboarder, Max Haglund, now 23, would often injure himself. He would slip off his skateboard, roll his ankle and fall to the ground.

But after a few days or weeks of rest, over and over again, just like magic, his body would recover. Scrapes would scab up, bruises would begin healing and he would be back on his skateboard—ready to repeat the cycle again.

That fascinated Haglund. And that fascination, of how the body can change and heal itself, has stuck with him ever since. It drove him to pursue a major in kinesiology at CSUN, an area that focuses on the human body and movement.

“I was always interested in the human body, the way it heals itself, the way you can change it, gain weight, lose weight, gain muscle, all the different ways you can influence how it works,” he said.

While Haglund was at Pasadena City College, he befriended health trainers and became more convinced that kinesiology was the right major for him. His interest in the human body was properly paired with his area of study.

“It kind of clicked with what I wanted to do,” Haglund said.

After he gets his bachelor’s degree, Haglund plans on attending graduate school. Afterward, he hopes to get a job with a professional sports team or at a place similar to CSUN’s Athletic Training Center.

He remembers being younger, climbing a tree and falling. He landed on his right arm and broke his bone high up near the shoulder. Initially, he was happy that he broke it.

“I always wanted to break my arm so I could get the cast and have people sign it,” Halgun said. “But where I broke it, you couldn’t get a cast. So I just wore a sling the whole time. So I was kind of disappointed.”

It’s easy, almost second nature, to help others when they’re injured in the Center, Halgun said.

But at times it can be challenging.

“But being in here in the center and getting some of the people in here, the athletes, when they’re coming in to get rehab, and getting to know them is difficult sometimes,” he said. “It’s a process.”

Haglund also practices yoga regularly and finds that his philosophy on life fits perfectly with that of yoga: self awareness, staying in the present and not worrying about the past or the future.