NRA’s pushback against sensible gun-control is stale and tired 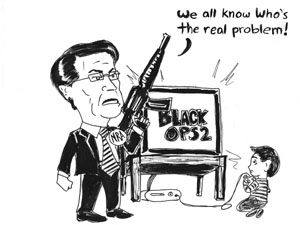 We all know the names: Columbine, Virginia Tech., Aurora, and now Sandy Hook. It’s a long, sad list of violence; massacres carried out in public places where we should all be safe.

President Obama recently held a press conference announcing his plan to reduce gun violence in the United States. His sweeping proposal involves not only reducing the number of assault weapons on our streets, it also examines funding for our mental health system, getting more trained police at our schools and requiring universal background checks for those who purchase guns. These common-sense ideas are a good start.

So, why is the National Rifle Association having a meltdown?

They’ve made it clear they’re vehemently opposed to any kind of gun control legislation. In the wake of the Newtown school shooting in which 20 children and six adults were killed, Wayne LaPierre, head of the NRA, went so far as to suggest that what we really need are more “good guys” with guns.

The NRA’s outlandish behavior is completely out of proportion with the suggestions that will soon be before Congress. Their ridiculous attack ad paints the president as an out-of-touch elitist liberal who wants to line up the nation’s children for target practice. They sound less like an influential constitutional rights lobby and more like spoiled, angry children having temper tantrums on the floor of the Wal-Mart toy department. Well, maybe the sporting goods department.

Maybe the NRA leadership is just so busy having paranoid panic attacks they haven’t had time to listen to what the conversation is actually about. No one is suggesting repealing the rights of Americans to carry a gun for lawful purposes. We have the right to defend our homes and our families. We have the right to go out into the woods and shoot at deer. Those rights shouldn’t extend to running around with an AR-15.

In the last 30 years, there have been 62 mass shootings in the U.S. Seven of them occurred in 2012. It’s true that the data can be analyzed in different ways. For example, Mother Jones Magazine recently published a comprehensive study on mass shootings. They started with the FBI’s definition of a mass murder (four or more people killed in one location by a single person in a short period of time), then, excluded gang violence and armed robbery from their analysis. They chose to focus on shootings where the motive did not involve money or gang retribution. Critics could argue this skews the numbers, but the intent here was to examine the phenomenon of mass shootings.

No matter how we arrange the statistics one thing is clear – we, as a society, need to act. As President Obama said in his address on Jan. 16, “We can’t put this off any longer.”

So, what is the president proposing? After a month-long review process during which Vice President Joe Biden and his task force met with 229 organizations including the NRA, law enforcement and public health officials, the administration has decided to focus on these points:

There is little question that these mass shootings are being carried out by disturbed individuals. We need more money and support for mental health services in our communities so we can recognize and treat people before something terrible happens. Too often, violent, mentally ill patients don’t get treatment until they’ve committed a crime. Let’s help them before they’re going to group therapy in shackles and an orange jumpsuit.

This already goes on in many places. In California, for example, a buyer can’t just purchase a gun at a gun show and take it home. They must wait 10 days while a background check is done. Once approved, they can pick up the weapon from the seller. Not only does this provide a “cooling down” period, it helps sellers ensure they aren’t giving a gun to a known felon. We need to make this consistent across the country. If someone commits a violent felony, they have given up the right to own a gun. Period.

This one seems like a no-brainer. The right to bear arms as covered in the Second Amendment has been understood to apply not only to hunting, but to protecting one’s home and person. That’s fine. People can do that with handguns, shotguns and rifles. The average citizen should not be allowed to own a weapon designed for modern warfare. Some police support the idea that they don’t need to be facing civilians with military-grade assault weapons. No one needs a gun that is inherently designed to kill people.

Here’s a crazy idea! If you want more people with guns to protect schools, rather than arming teachers andcustodians, lets hire some folks who are actually trained to do it. These really are the “good guys” with guns. They have the training and accountability to do the job correctly. Let’s let them.

Just because someone owns a gun doesn’t mean they know how to use the thing. Police and military personnel are trained to react in combat situations. They are conditioned to counteract their automatic fear responses and make thoughtful, split-second decisions when someone is pointing a gun at them.

The person who legally carries a concealed handgun and goes to the range once or twice a week is not. Would they know where the shots are coming from? If someone else is “helping” as well, how do they know who the perpetrator is? How good is their aim? Once authorities arrive, how are they supposed to determine who is the “good guy” and who is the “bad guy?”

Listen to the pre-show announcements the next time you go to the movies. You will probably be reminded to “keep an eye out for suspicious characters” after the admonition to turn off your cell phone. Seriously? We’re ok living like this?

How many people have to die at school, work, or the movies before we stand up and say, “No more”? We have become so numb to violence and so apathetic about the possibility of making any changes that it took first-grade children being shot in their classrooms for us to take any real notice again.

It’s time to wake up. Violence only begets more violence. More guns is not the answer. It’s time to take control of this situation and demand real change.