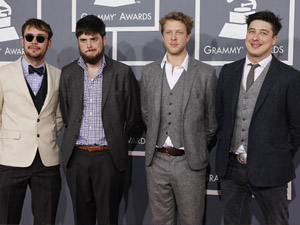 With no clear front-runner in the nominations, the 55th annual Grammy Awards show is shaping up to be an interesting evening.

The lineup of performers include nominees fun., Mumford & Sons, Rihanna, Taylor Swift and The Black Keys.

LL Cool J will host the annual ceremony, airing Sunday, February 10 from 8:00 p.m. to 11:30 p.m. on CBS. fun., Jay-Z, Mumford & Sons, Frank Ocean and Kanye West top the nominations with six each, followed by The Black Keys and Miguel with five nominations each.

The prestigious Best New Artist category includes fun., Alabama Shakes, Hunter Hayes, The Lumineers and Frank Ocean. The award is intended to honor recording artists for their “overall excellence without regard to actual album sales” according to the official website for the Grammy Awards.

Record of the Year nominees include the edgy distortion of “Lonely Boy” by The Black Keys, Kelly Clarkson’s pop anthem “Stronger,” the rollicking “We Are Young” by fun. featuring Janelle Monae, Gotye and Kimbra’s moody tune “Somebody That I Used to Know,” the laid-back groove of “Thinkin Bout You” by Frank Ocean and Taylor Swift’s inescapably catchy “We Are Never Ever Getting Back Together.”

Song of the Year is awarded to the artist who wrote an exceptional single, while Record of The Year goes to the artists involved in the actual recording of the song.

fun. and Kelly Clarkson also picked up nominations in the Song of The Year category. Other nominees include Ed Sheeran for “The A Team,” Miguel for “Adorn” and Carly Rae Jepson for her peppy summer hit “Call Me Maybe.”

Florence + The Machine picked up a nomination in the Best Pop Vocal Album category for her powerhouse vocals on “Ceremonials”. P!nk is also nominated in the same category for her edgy new album, “The Truth About Love.”

The race for Best Rock Performance includes some newcomers and a couple of very familiar names. The Black Keys are nominated again for “Lonely Boy” and Mumford & Sons are up for their breakout hit, “I Will Wait.”

Fans of “The Boss” will be glad to see Springsteen is nominated for “We Take Care of Our Own,” a classic rock ‘n’ roll song that hearkens back to the days of “Born In The USA.”
Coldplay is also in the running for their youthful, folksy pop anthem, “Charlie Brown”.
The race for Best Rap Album includes 2 Chainz’s “Based on a T.R.U. Story” and “Undun” by The Roots. Lupe Fiasco, Rick Ross and Nas are also nominated for the award.

Best Alternative Rock Album is an eclectic mix of talent this year. The category first appeared in 1991, and was originally intended to highlight artists that didn’t fit into more mainstream groupings like Best Rock or Best R&B; Album. This year’s nominees include Gotye’s often hauntingly atmospheric mix, “Making Mirrors,” Bjork’s “Biophile” and the venerable Tom Wait’s in-your-face arrangements on “Bad As Me.” With Fiona Apple and M83 rounding out this category, who will take home the golden gramophone is anyone’s guess.

Some artists are noticeably absent from the list of nominees this year.

Pop darling, Justin Bieber released his third studio album, “Believe,” to some critical acclaim. The album featured a more mature sound for the “Beibs” but The National Academy of Arts and Sciences weren’t impressed enough to offer a nomination in any category.

The 55th Annual Grammy Awards will once again be host to an incredible mix of artists and genres. We’re all going to have to wait and see who will go home happy, and who will just go home.

For a full list of the nominees and categories go to www.grammy.com/nominees