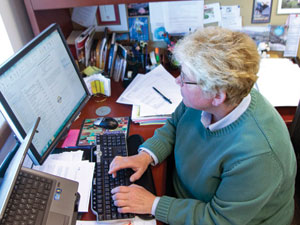 When 12 people were killed in a mass shooting at a theatre in Colorado last July, politicians and campaigners in the midst of a presidential election season warned

Americans not to use the tragedy for political purposes.

Five months later, 20 children and six adults were shot and killed at a small elementary school in Newtown, Conn., and the discussion on gun control started.

Some voices that chimed in on the conversation have been coming from the higher education community. On Feb. 4, U.S. Education Secretary Arne Duncan, along with the recently formed College Presidents for Gun Safety, the Association of American Universities, Mayors against Illegal Guns, the International Association of Campus Law Enforcement Administrators (IACLEA) and the United States Student Association, held a press conference to support gun control reform and to reject the National Rifle Association’s suggested solution of having more guns on college campuses.

At a press conference on Jan. 24 California Senator Dianne Feinstein unveiled strict gun-control legislation that mirrored the 1994 Violent Crime Control and Law Enforcement Act, which expired in 2004. The Assault Weapons Ban of 2013 would reinstate the national ban of several high-capacity, semi-automatic firearms defined as assault weapons. According to the summary of the bill, 120 specific weapons as well as “certain other semiautomatic rifles, handguns, shotguns that can accept a detachable magazine and have one military characteristic” are classified as assault weapons.

CSUN Police Chief Anne Glavin and president of IACLEA, attended Feinstein’s Jan. 24 press conference where the legislation was announced. According to Glavin, IACLEA represents 33 countries and focuses on improving public safety on college and university campuses around the world.

Glavin said that as a public safety advocate and expert, she and the organization worked with Feinstein behind the scenes to produce a bill that would help to make colleges safer. Glavin said that her involvement with the bill was in no way representative of CSUN or the CSUN Police Department’s political stance on the issue of gun control, but understands the highly politicized nature of gun control legislation.

“Does this topic have political pieces to it? Of course it does,” Glavin said. “But that’s not our primary focus – ours is the safety of students, faculty and staff on college campuses. That started a long time ago for our organization with the concealed weapons issue, which is a big issue in this country, in terms of which states have laws that keep handguns and firearms off college campuses.”

Glavin was referring to several efforts in different states to allow students who are gun owners to be able to carry concealed weapons on campus. According to the Campaign to Keep Guns Off Campus, 15 states in the last two years have introduced pro-concealed carry legislation, but most have not succeeded.

“In light of situations that have occurred at campuses like Northern Illinois and Virginia Tech and other places where there have been these horrible tragedies, they are looking to protect themselves–that’s not surprising,” said Glavin. “They sometimes go beyond looking to university police or campus public safety, security, whatever the colleges have, and they feel they have to arm themselves.”

Aaron Goldhammer, a CSUN alumni and previous president of the student organization CSUN College Conservatives, supports the idea of concealed carry on college campuses. From his understanding of the second amendment, he believes any kind of attempts at gun control are illegal and infringes on people’s rights to protect themselves.

“There really isn’t any place where the ability to protect yourself isn’t appropriate,” said Gold Hammer. “If some deranged person is on campus, what are we supposed to do? Duck and cover? I mean, what plan do we have? Are we supposed to be sitting ducks or should we fight back?”

Goldhammer contends that when seconds count, the police are only minutes away, but Glavin refuted the idea that the only way that people can protect themselves in dangerous situations is to carry equally dangerous weapons at all times.

Glavin worries that guns would unfortunately be used in heated altercations or misused by even law-abiding citizens.

“Do we want that happening on college campuses, all because we are worried about the still rare occurrence of a massacre happening?” asked Glavin. “There’s no question that these massacres are happening more in say the last 20 years, but the fact is, these things are still rare occurrences. There are things that have to be done both in terms of mental health issues and safety issues to ensure that we can be as tight as possible in protecting our campus communities.”