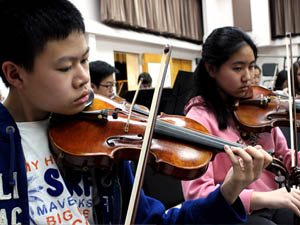 On Sundays at 5 p.m., young musicians from throughout Southern California finish setting up for rehearsal at CSUN’s Cypress Hall. Between laughter and smiles, they take a seat to prepare for their conductor to arrive. It only takes one call to get the orchestra’s attention. They tune their instruments and rehearsal begins.

There is an expectation for each musician. They are all supposed to know what they are doing and where their part is. The conductor doesn’t hesitate to call out mistakes and demand the best performance possible.

With more than 250 musicians from about 30 different high, middle and elementary schools–most in the San Fernando Valley–young musicians have the opportunity to thrive in the CSUN Youth Orchestras.

For most members, the orchestras supplement the music education they’re receiving from school and private lessons.

“It’s like little league,” said John Roscigno, director of the CSUN Youth Orchestras and music professor at CSUN. “The kids probably get to play a little baseball and sports at school, but they want to join an organization outside of school and meet other kids from other schools. It’s the same thing with the youth orchestra.”

The youth orchestras are divided into three different groups: the philharmonic, the symphony and the camareta strings.

“Students audition and whatever level they are at, we place them in one of the three groups,” Roscigno said.

The group started in 1970 as the Valley Young People’s Orchestra. But in the late 1970s CSUN invited the orchestras to take residency on campus, and it has since been called the CSUN Youth Orchestras. Orchestra members range from 5 to 18 years old. Any pre-college students are welcome to audition.

Victoria Yim, 15, a sophomore at Marlborough School, plays the flute and piano with the CSUN Youth Orchestras. At her school, there isn’t a symphony or band. Yim wanted to join an orchestra, leading her to CSUN.

“My parents started me in piano when I was 3 or 4 and I didn’t
really like it, but my parents didn’t want me to quit,” Yim said. “As you keep practicing it gets easier and more fun. It’s fun to
express yourself through music.”

Every season the Youth Orchestras have three performances and typically cost $10 to $12. The last performance will be at the Valley Performing Arts Center with great acoustics, Roscigno said.

Each group has 10 three-hour long rehearsals before every concert, except for the last performance of the season, which takes them six to eight sessions, Roscigno said.

Jacob Rubinstein, 16, is a trumpet player from Oak Park High School. He described the orchestra as a challenging, but interesting experience.

“My school band is bad and this is at a higher level,” he said. “This is different because people come from everywhere to audition just to do this. People in high school do it for credits.”

According to Roscigno, the orchestra plays anything from Beethoven or Brahms to Mahler.

“They really do get challenged with the top level of repertoire,” he said. “They play stuff that any professional orchestra would play.”