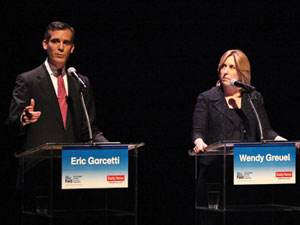 Former Los Angeles Deputy Mayor Austin Beutner moderated the debate and began by asking the candidates what leadership qualities they bring to the position.

Kevin James said he has a unique perspective of City Hall not only because of his background in the private and public sector, but also from his media background as a broadcaster covering City Hall issues.

Beutner pointed out that it may be difficult for James in the mayoral seat, because he is a republican among a heavily democratic Los Angeles City Hall.

“Part of what it takes to lead is coming in with a lot of respect,” James said. “It’s about representing people in a fair non-partisan way.”

One of the hot issues brought up by Beutner was the Los Angeles Department of Water and Power and Bureau of Sanitation allocating $8 million to help open the Children’s Museum in the San Fernando Valley.

Wendy Greuel called the joint venture a poor example of the private and public sector working together. She then noted that the VPAC was a prime example of both sectors working well together.

“This is a jewel, not only for the San Fernando Valley, but the entirety of Los Angeles,” Greuel said.

The candidates went on to discuss public safety, specifically the practice of banking. Beutner showed in a slide presentation that the LAPD’s use of banking to accumulate overtime and vacation time has lessened the number of officers on the streets.

“I do believe we are the most underpoliced city in the country,” Greuel said.

James noted more on the financial loss of the practice.

“Part of the complication is when (banking) gets paid out, it gets paid out at a higher rate,” James said. “It’s an accounting trick.”

The other public safety issue had to do with complaints of the fire department’s slow response time. Emanuel Pleitez said that Los Angeles needed to explore blended training options.

“We need to rethink how we think about public safety,” Pleitez said.

The issue that made the audience perk up was the problem of traffic and transportation in Los Angeles.

Buetner noted the 405 and 101 Freeway interchange as one of the most congested areas. James said the city needs to put a rail tunnel in the Sepulveda Pass. He also noted that it would cost $8.9 billion.

“Where would we find that money?” James questioned Buetner.

“We need job creation in the valley so they don’t have to travel that far,” Greuel said.

In his closing statement, Eric Garcetti said that he wanted to make Los Angeles City Hall work with its citizens again.

“We need a true public servant,” Garcetti said. “The most important thing for a leader is to create leaders.”

After the debate, Jan Perry said the most important thing for Los Angeles is its overall economy. She said the city needs to become more business friendly.