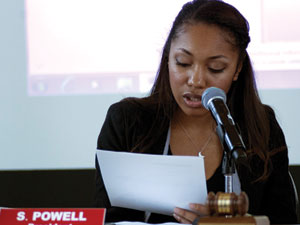 The Associated Students discussed their concerns about the recent CSU Executive Order 1083, “Mandatory Reporting of Child Abuse and Neglect,” signed by former Chancellor Charles B. Reed.

Members of A.S. were particularly concerned with the language of the order, which is not specific about whether or not students over 18 who work through the university will also need to become mandated reporters.

“If students don’t know this executive order exists then they can be sitting in [the] classroom or Freshman Orientation and talking about things they thought would be in a safe place,” said A.S. President Sydni Powell. “There are freshmen that come in being 17 years old, so being in the classroom can create an environment where anything they say can be reported.”

The memorandum will give direction on how the CSU will implement the California Child Abuse and Neglect Reporting Act, which was adjusted by Gov. Jerry Brown September 2012.

Powell said that the idea of having a “safe space” for students to talk about themselves with their peers might change, especially if all students are not informed about the order.

A.S. does not yet have a resolution or strategy to inform the student body of the new policy, as they wait to learn more about the details of how the policy will be implemented.