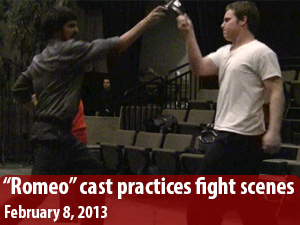 “Romeo & Juliet” will be the latest production to be presented by the CSUN theatre department, opening on Feb. 15 at 7:30 p.m. According to theatre manager William Taylor, “It’s the most popular romance. It’s about a boy and girl from different families.”

They fall in love with each other, the groups fight and it’s not a happy ending.”The production, which is student performed, will be directed by Shad Willingham, who previously directed last year’s production of “Avenue Q.” This interpretation of “Romeo & Juliet” features a more modern take.”It takes place in New Orleans in 1959, as opposed to the Elizabethan production,” said Taylor.

He went on to say there is also a different take on the masquerade ball where Romeo first meets Juliet. Taylor said the production’s premiere date was not a coincidence.

“It was planned to premiere around Valentine’s Day,” he said. The theatre department will also perform daytime matinees of the production in March for local high schools.

The theatre department’s production of “Romeo & Juilet” will take place at the Experimental Theatre in the Valley Performing Arts Center. General admission is $20, seniors are $17, CSUN employees are $16. Students with ID are $15. Students with ID purchased before opening night are $9.

“Romeo & Juliet” will have eight performances, the last performance will be Febuary 24th. To find the other performance dates visit the CSUN theatre department page.