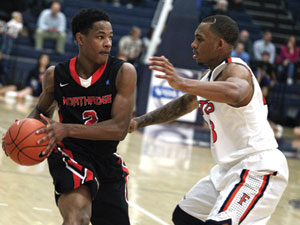 Going into their third game without leading scorer sophomore guard Stephan Hicks, the Matadors extended their longest conference winning streak of the season to three on Thursday.

CSUN completed a comeback over visiting UC Irvine 70-61, avenging an earlier season loss against the Anteaters.

Starting out slow, the Matadors did not make a field goal until nearly eight minutes into the game. The Anteaters jumped out to a 17-point lead in the first half, draining the energy out of the crowd.

Northridge shot 27.6 percent, making 8-29 attempts in the first half.

Four of those eight shots were made by redshirt freshman forward Trevone Williams, who came off the bench and provided the Matadors with a spark.

“I thought Trevone Williams was really the best player in the first half for us,” said head coach Bobby Braswell. “By far he had the right energy defensively and offensively had some big shots for us.

The entire bench contributed heavily for Northridge, in contrast to Irvine, outscoring the Anteaters 34-18.

“I just wanted to come in, you know, and get us hyped and get us up to play at a level we need to play at,” Williams said.

During half time Coach Braswell focused the team and shifted the Matadors’ momentum.

“I just challenged them at half time to not to be satisfied with the fact that we’d won a couple games in a row that we got to get back to doing those things that got us there,” Braswell said. “They really came out and turned the defense up at the second half, which was critical.”

Northridge junior guard Josh Greene took the speech to heart and came on strong. Throughout the second half, Greene found his stride scoring 19 of his 21 points.

CSUN had a scare with Greene getting injured during the second half, taking him out of the game for six minutes. Greene found power from his injury and absence.

“It just fired me up even more,” Greene said.

Continuing their comeback in the second half, the Matadors took their first lead of the game with 11:30 left in the second on a Greene three-pointer 47-46.

The Anteaters would never hold the lead again.

With two minutes left in the game, Greene scored two three-pointers in forty seconds to break a 57-57 tie, and lead the Matadors to victory.

Greene feels hope for the future with ambitious young players.

“We had guys step up tonight and make plays, and the guys that are supposed to make plays have to be more consistant then they are already,” Greene said. “And we’re playing really well right now and I’m happy we’re with like our young group and we’re showing a lot of toughness right now.”