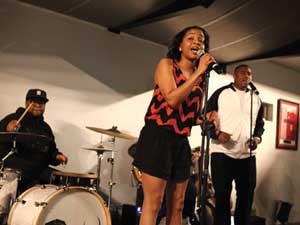 The spring’s first Soulful Saturdays kicked off with some familiar faces including host Jonnae Thompson, and singers Noelle Chesnut and Trijean Wilkins. .

Chesnut took the stage with Wilkins as her backup and began with a couple of covers by R&B; artists Jazmine Sullivan and Frank Ocean and covered popular songs from the 90s. She later invited Wilkins to do a few duets with her in ode to Valentine’s Day.

This was not the couple’s first time working together. They collaborated in the last Noontime Concert in the USU.

Wilkins, 22, who began singing in church when he was only 8-years-old said that it is nice to work with someone on the same page as him.

“Noelle is great. It’s cool because we share the same passion for music,” Wilkins said.

The live band took the stage first, featuring a drummer, guitarist and keyboard player. Thompson opened up with a few improvisation songs to get the crowd warmed up and took ideas from the audience.. Alumni Ytzel Fernandez suggested that Thompson sing about “Chocolate Panties.”

Before intermission, Wilkins sang to the audience and the women cheered and screamed for more.

Stonefire Grill was served to attendees during the intermission for free. Bread sticks, salad, pasta, tea, and cookies lined the table.

Wilkins took the stage, once again, with Chesnut as his backup, and sang an assortment of covers, beginning with Stevie Wonder’s “Knocks Me Off My Feet.”

“I loved it, it was a lot less nerve-wrecking than something like the showcase would have been. Everyone was rooting for us, it just felt good to be loved,” said Wilkins.

Chesnut and Wilkins’s final song together was a spin off of Miguel’s “Adorn.”

USU Events Assistant for Special Events, Quinesha Summerville, said she was happy with the outcome of the show. About a month’s worth of work went into planning the show, but as this was her third time planning the event it was not too difficult.