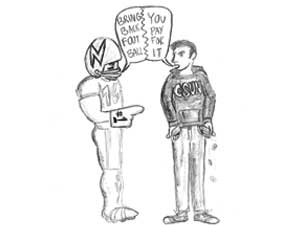 Casey’s Con Side; Keep Football Away

A football team in the San Fernando Valley? That makes no sense. Well, Pierce College has one, but when was the last time you saw anything about them in the news?

CSUN football was discontinued in 2001, much to the chagrin of the community that wanted to see a local football team they could support. There is now a petition going around that wants to bring this team back, but it’s a waste of time.

The Matadors should never, and most likely never will, field another football team. The hurdles required to do this, monetarily and logistically, are something that a small commuter school like Northridge is unable to do.

As of now, Northridge has 16 team sports that compete in Division I, nine women’s teams and seven men’s teams.

According to the NCAA’s Title IX, the amount of money spent on both genders sports must be equal. With men’s sports taking up more money and publicity across the country than women’s, their is a normal increase in women’s sports at each school.

According to a Daily Sundial article from 2001, after a recommendation to then-President Jolene Koester, CSUN cut the football program in order to save money for athletics and create more gender diversification between sports.

In an LA Times article in 2001, the Matador football team reportedly brought in $26,000 in ticket sales, while the program cost $1 million to run. This isn’t how CSUN should be spending resources, especially when students are already complaining about fee increases and our schools budget is consistently used as a political football.

The most important facet to this ridiculous idea of reviving an unneeded program is the level of competition CSUN would deliver. When Northridge football was around, they were playing in Division 1-AA, now known as the Football Championship Subdivision. The ability to put together a competitive team while also re-establishing a complicated, semi-professional, sporting program is just not possible.

No matter what, CSUN will never become the powerhouse football programs of it’s Los Angeles neighbors, UCLA or USC. What kind of recruits are we going to get to come to Northridge? A blue-chip prospect? Unlikely. A highly-touted prospect with grade problems? Another unlikely, as they head to community college to increase their GPA. Football doesn’t belong at CSUN. It didn’t work before and wouldn’t work again.

CSUN would most likely pool its talent from local high schools and community colleges. Could we be competitive at some point? Yes, but that could be years and years away, with some outstanding player coming in, but leaving for a bigger university after putting up eye-popping numbers.

So far, we have a financial commitment that would send an already tight budget for athletics and the university into the red even more, and a football team that probably wouldn’t even be competitive for years to come. So to those who want a football team back, do you want to sit there and cheer on a team that takes on colleges that most of us didn’t even know existed, and end up with a losing record?

Don’t get me wrong, I am a football fan, and there is nothing better than cheering on your favorite team, but this is sports. “Fans” jump on and off a bandwagon based on how that team is doing every year, how long will CSUN students support a losing program? My guess is not that long.

Joell’s Pro Side; Bring Back Football

Football fans around the world travel hundreds of miles to stay connected to their favorite teams. Over 108 million televisions were tuned in for the Super Bowl, and many rivalries between families and friends due to sports.

As you might have seen, there is a petition floating around campus to bring back the CSUN football team. It was disbanded in 2001 due to tight finances in the athletic department. The petition is a great idea and football needs to come back to our school.

I’m a firm believer that footballs entertainment trumps all other sports, and is a great to watch live at a stadium while rooting on your team with other fans.

It’s obvious, that at first, we are not going to have the best team in the division. But we are a large enough campus that Division I-AA will happily accept us again. While we don’t have the money or the prestige invested in a quality football program to capture big ticket players, CSUN’s location is prime. Being in the same county as USC and UCLA means both universities might stamp our dance card for the opportunity at homecoming games with the Matadors. Usually early in the season, these bigwig teams want to have easy targets to conquer and CSUN could fulfill that role. While not the best maneuver to engender pride, we can establish some quality games that can help to elevate the program.

CSUN would also garner extra money from splitting gate revenue from both games where each ticket costs anywhere from $30 to $100. If we split the thousands of dollars earned from each game with USC and UCLA, that could add up quickly.

The incentives from the film industry can also be factored into the potential boom. As many students know, the university is featured in TV shows and feature films each year. Most recently was “American Idol,” “Ringer,” and “Arrested Development” filming at the VPAC.

CSUN has a valuable location for the film industry. It is just out of reach to not be disturbed by the tourists of Hollywood, but close enough that it costs little to move their production to our university.

If we had a football team and field to work with, the amount of filming gigs we get could increase significantly. There are numerous film and shows featuring football teams and most of the time they are using the schools team as extras.

If we could renovate the field to be up to standards of a prestige university, we could chalk up more money for the campus and help place it towards other athletics.

We would be first pick to wallop on at nearby schools’ homecoming games and if we really want a football team to cheer on with the whole of the San Fernando Valley, then we have to start somewhere.

Why not now? Sign the petition and let’s get a move on. I know alumni and current students would like a football team so they could root them to victory.

And , it would make us a more appealing campus because I know I’m not the only person who ranked colleges to attend by best football teams.