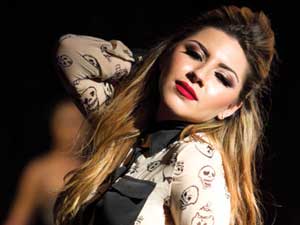 In the fashion world, well-noted designers go big or go home. The sisters of the CSUN Alpha Gamma Alpha sorority took on that idea on when they hosted their first annual charity fashion show, Imagine Runway to Relief.

The show was a year-long process that finally made its debut Saturday February 9 at the Northridge center.

Alpha Gamma Alpha made it a goal to raise $10,000 to donate to the Society for Orphaned Armenian Relief (SOAR). SOAR supports orphaned Armenian children all over the world.

Alpha Gamma Alpha philanthropy chair, Marine Piliposy, chose to work with SOAR because they directly handle the problems happening in other countries.

“The organizers travel to assess the situation, see what needs to be changed and pays to oversee the construction and make improvements. The money isn’t lost in the process,” said Piliposy.

CSUN’s chapter of Alpha Gamma Alpha prides themselves on connecting to Armenian culture and assisting with Armenian causes. They established an ongoing relationship with SOAR to help renovate a different orphanage every year.

With the dangerous war raging in Syria, the sorority also wanted the fashion show’s money to aid the Syrian relief efforts. The war left many children without the essentials like food and warm clothing.“Hopefully we raised enough to split the profits both ends,” Piliposy said.

The sorority’s goal was ambitious for their first event, but fundraising efforts were not limited to the fashion show ticket sales. They anticipated close to 200 guests and the house was almost full the night of the show.

The sorority also contacted their sorority sisters across the nation in hopes of gaining their support through donations.

The entire fashion show was a CSUN community effort. Models volunteered to walk the runway with clothes donated by local stores and designers.

CSUN fashion major, Kadejah Henderson dedicated months of her time to help style the show. She put together a total of 32 looks with donations from local boutiques and designers.

The show displayed a variety of fashion-forward casual and formal looks.

One of the biggest trends that hit the runway that night were body chains and bows. They were incoporated in several outfits and served as unique statement pieces.

Fashion line Mika Couture provided a majority of the jewelry. From beautiful headpieces to dazzling arm adornments, the body chains were an accessory every girl in the audience wanted to walk out with.

Trendy bows in different colors and patterns were donated by The Social Bow, which Henderson creatively styled as headpieces and necklaces for a few of the looks.

The show overall hit right on this year’s trend by featuring a variety of sheer and leather tops, peplum skirts, bold graphic prints and the popular thigh-high slit skirts.

The audience was entertained and pampered with a few musical guests and hand served refreshments during intermission.

The entire event was a community effort and the audience could see that.

“It was a great show. It’s so inspiring to see all these organizations come together for a cause,” audience member Rafayel Mgdesyan said.

Couture employee Arpy Gezalyan, one of the sponsoring fashion companies enjoyed the show and expressed how well it was put together.

“The whole community really worked together. It was fun and everyone got to have fun. We got to advertise, and the girls get experience running the show and raise money,” Gezalyan said.

“I’m very impressed with their work. I’m so proud that they would dedicate their Saturday night into an effort for the needy and the abandoned children who have nobody else except people like us.”