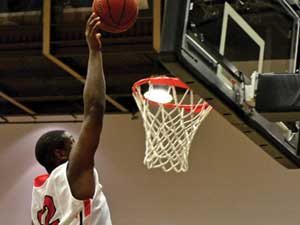 The Matadors snapped their three-game winning streak as they fell to Long Beach State 83-80 at the Matadome Saturday evening during “Alumni Reunion Night.”.

Many former student athletes and faculty were a part of the sellout crowd, and select members of the alumni group were honored on center-court at halftime during the game.

The Matadors had five scorers in double figures, led by sophomore forward Stephen Maxwell who had 20 points and 8 rebounds on 6 of 9 shooting. CSUN out-rebounded the 49ers 40-34 and received help from the bench, who combined for 37 points, led by redshirt freshman forward Trevone Williams, who chipped in 12 points and 7 rebounds.

“I’m happy that everybody played hard today, it wasn’t just a few guys,” Williams said. “I was really satisfied with everyone competing, the ball just didn’t roll our way today.”

CSUN fought back and took its first lead of the game at 20-19 off a three-pointer by freshman guard Landon Drew. Another three-pointer by junior guard Josh Greene, punctuated a 14-3 run by Northridge, prompting a timeout by Long Beach.

After that run by Long Beach, it was all Northridge to finish the first half. The Matadors went on a 13-0 run and went into halftime with a 39-28 lead, ending the half with a bank shot buzzer-beater by Landon Drew.

Head coach Bobby Braswell was very pleased with his team’s first half effort.

“At the very beginning of the game, they were intent on shoving us around, but our guys responded to it really well,” Braswell said. “We started running at them and got some fast break baskets and that wore them down a little bit.”

Ennis and Pappageorge came out on fire out of halftime for the 49ers, leading them to an 11-2 run. CSUN’s lead evaporated within the first two minutes of the second half and the score remained close for the rest of the game.

“We didn’t punch them right away, and that’s what it takes,” Drew said. “We have an 11 point lead and we have to keep expanding it and you can kind of tell we lost our momentum that we built in the first half.”

Tied 73-73 with two minutes left, 49ers sophomore guard Mike Caffey took over the game and hit key shots to put Long Beach up 80-75 with 26 seconds left, ultimately sealing the deal for the 49ers.

“Caffey just made some huge shots, and that’s what he does,” Braswell said. “They hit some big shots down the stretch and we didn’t get the stops we needed, that’s why they came out on top.”