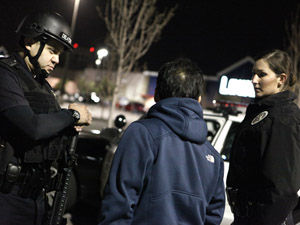 Police received a tip Sunday afternoon regarding a potential sighting of former LAPD Officer and fugitive Christopher Dorner near the Northridge Fashion Center at Plummer Street and Corbin Avenue.

There are about 50 officers looking for Dorner in the Northridge area, LAPD Lt. Ahmad Zarekani said.

The sighting was not close enough to CSUN to report any closures or alert campus police, Zarekani said.

“If we hear something that could involve CSUN, we will share the information with the CSUN Police Department,” Zarekani said. “Within the last hour, four calls have been made in the North San Fernando Valley.”

Police evacuated the Lowe’s on Nordhoff Street and Corbin Avenue Sunday evening. The tip LAPD received had information that Dorner may have been spotted inside the hardware store, Sgt. Brian Reynolds said.

Reynolds said that two sightings within the area have been false, but calls are still coming in.

Dorner is accused of killing three people, including a Riverside police officer, and wounding two others on Feb. 3.

Authorities set up a command post at Nordhoff Street and Shirley Avenue and checked cars to see if anyone resembled Dorner.

Authorities are offering a $1 million reward for anyone with information leading to the capture of Dorner.

LAPD asked residents to call 213-486-5230 for any information on Dorner’s whereabouts.