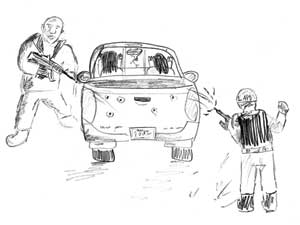 In last week’s tragic shooting of police officers and their family members by suspected gunman, Christopher Dorner, there was a legitimate and justifiable outrage for the blood on his hands. Yet, in his manifesto he raised an interesting conundrum. Based on their history, the police have more innocent blood on their hands and yet, culturally, we accept the systemic destruction the police wrought in the name of justice.

The true tragedy in this entire affair is the general sense of discomfort from the public and who they should be more afraid of. Is the alleged murderer who shot innocent people and on duty police officers any scarier than the indiscriminate shooting conducted by the LAPD?

In the general frenzied haze, mistaking a grey truck for a blue truck is unfortunate norm. Predictably, police released the cliched response of claiming it was a case of “mistaken identity.” No shit. You shot two women in a blue Toyota Tacoma delivering newspapers instead of shooting a lone male in a grey Nissan Titan. It’s sad that it has to be said, but maybe you should stop to think before you shoot identities mistakenly. Especially when their description doesn’t remotely match the suspects. The mental gymnastics is appalling.

The LAPD is no stranger to allegations of abuse and misconduct. The Rodney King beating is the immediate, recollected incident. Unfortunately, the lesson was not learned as the LAPD has been caught on tape in recent years assaulting citizens.

Alesia Thomas, an addict and struggling mother, died in the custody of the LAPD this past summer. She had earlier dropped her children off at a local police station in an attempt to abandon them. The police found her at home and proceeded to arrest her. During her arrest, she was physically stomped on in the groin by a female officer. She later died in the backseat of a police cruiser. This incident was videotaped by the LAPD and yet they refuse to release the footage. This is an all too familiar scenario with the LAPD.

Looking at the Dorner incident, the irony of a man who felt he was pushed to the edge due to the perceived corruption flowing from our police force and the result of that same police force proceeding to shoot innocent people cannot be understated or ignored.

My initial reaction to seeing innocent people shot by overzealous and on-edge members of the LAPD was awash in the awful feeling that they would receive little, if any, discipline for their ridiculous actions. It was a sad realization that despite the overwhelmingly positive impact the police can have on our lives and the general quality that most officers display on duty, there is an ever-present sense of dread that some of them will be responsible for hurting the people they are supposed to be protecting.

Even worse is the general apathy felt when knowing that nothing will happen to these awful specimens of policing. A haze of protection and complicity is revealed as more often than not, bad cops continue being bad cops and good cops stand by and let it happen, effectively pulling the trigger themselves.

A 2010 report by the National Police Misconduct Reporting Project, a nongovernmental and nonpartisan project, showed excessive force is the most common type of misconduct by police officers. In the same year, LAPD had 171 officers accused of using excessive force. Dorner was fired after he reportedly lied about a fellow officer’s use of excessive force yet we know it happens and is rarely addressed.

Police officers deserve our gratitude and respect when they do their complicated jobs right. But when they fail to carry out the public’s best interests and when they fail to fix what’s wrong, they deserve our scorn and ridicule. The rule of law is what binds our society together. Police officers are tasked to enforce those laws and they should always be held to a higher standard. Yet time and time again, they get away with various degrees of bull-pucky. Murder, corruption, assault, discrimination, all adds up to a police force that is hard to trust with our public safety.

The sad prospect is it’s hard to hope for anything to change after this incident though it would be a nice change of pace from the normal inaction or trite suspension. It doesn’t matter that officers are under high pressure from the threat of a hostile murderer. It doesn’t matter that comrades in arms and friends and family were killed. They should table those base feelings and emotions when they put on their uniforms. If they can’t, and the result is harm to innocent people, then they need to be fired and charged for any crimes they may have committed. Good cops need to step up and speak out.

As well as addressing the awful deeds of a rotten human being who found the wrong outlet for his rage, we also need to look long and deep at our dwindling trust in police departments across the country. We need to take this disgusting event and use it to fix what is wrong with the thin blue line.

There is something viciously corrupt with the conduct of the police in this country. Whether they are acting the part, actively covering up or ignoring the part, they exist to protect and serve us. They should not hold us down or trample on our rights, or harass and harangue us. The cold hard truth is that our societal rights are more important than their safety. That’s why they exist. To protect that which needs protecting at all costs.

That means stop shooting innocent people just in case they may be perpetrators. It means to accept responsibility when you screw up. Fire those involved and prosecute them just as you would any other criminal. Conduct better training and most importantly, stop hiring unbalanced and unfit police officers.

Change the metrics for how you weed out the bad ones. It should be a job for those who aspire to better society, not a ghetto for under-educated rejects from the sperm donation pool that is life. Unfortunately for us, less than stellar examples seem to break through that particular barrier all too often.

Cops who are complicit in covering up for brethren need to stop being cowardly. Stand up and have respect for your organization and the rule of law. Most especially when you are been responsible for maintaining it.

The LAPD has long been a joke of an organization due to continued corruption. It’s time to clean out the entire corrupt fraternity from the top on down and get a group of people that care enough to fix what’s wrong. Otherwise we will end up repeating this worthless cycle over and over again. I’m sick of it. I’m guessing many citizens are sick of it and the LAPD should be sick of it.