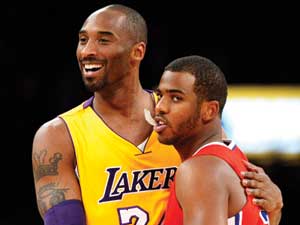 This season, Chris Paul has led the historically-awful Clippers to one of the best records in the NBA. He is averaging 9.5 assists per game, which ranks him second in the NBA behind the injured Rajon Rondo. What separates Paul’s value from the rest of the NBA’s point guards is his uncanny leadership ability.

He is a transcendent player who has transformed the Clippers from one of the bottom-dwelling teams in the Western Conference to a legitimate contender. He has changed the culture of the Clippers by bringing a winning attitude to the franchise.

Last season — Paul’s first with the Clippers — saw the team clinch a playoff berth and earn a first round victory over the Memphis Grizzlies, after a grueling seven game series. This was the first time since the 2005-2006 season they saw postseason play.

Not only is he a great leader, passer and scorer, he is a gritty two-time all-defensive first team player, who leads the NBA with 2.5 steals per game. Paul has all the necessary tools to stand unchallenged as the league’s best point guard.

Kobe Bryant once again finds himself in the top-tier of scorers in the NBA with his 27.4 point per game average. This ranks him third overall and first for all shooting guards. His ability to continue to play at such a high level in his 17th year in the league at the age of 34 is nothing short of remarkable.

Bryant can score at will and take over a game at any moment. He is one of the toughest players in the league to guard with his arsenal of offensive moves. He can pull up for the jumper, jab step and nail a fade away in the opponents face or drive to the basket.

Bryant is regarded by many other NBA players as the best shooting guard in the league. His intensity, commitment and dedication to the game are matched by no other player and have pushed him to being one of the NBA’s best shooting guards ever. Bryant ranks fifth all-time in points scored, and is the all-time leading scorer for the Los Angeles Lakers franchise. He has been selected to 15 all-star games, which is tied for second all-time.

If the game is on the line with just seconds remaining, which player would you want to take the shot? There is no question that player is Kobe Bryant. You want the ball in his hands, because he has made numerous game-winning shots throughout his NBA career. Bryant is the player you want as your starting shooting guard.

LeBron James is having another career year for the Miami Heat as they sit atop the Eastern Conference with a 31-14 record. He is averaging a ridiculous 26.7 points, eight rebounds, and seven assists per game, as he routinely terrorizes and creates match-up nightmares for opposing teams.

He is built like a tank and runs like a gazelle. He can guard small and quick players like Russell Westbrook and can step down into the post to guard bigger, stronger players like Carlos Boozer. James is also shooting a career best 55 percent from the field. He is in the middle of a five-game streak of 30 points per game with a minimum 60 percent shooting percentage.

He is the best play maker at his position, and is often tasked with facilitating and ball handling from the ‘point forward’ position. A very strong case could be made for Kevin Durant, as he too is having the best year of his young career, but James gets the edge for his defense and versatility. Not that James wasn’t unstoppable before, but him adding post moves to his arsenal as well as his new found ability to step up during crunch time, has made him even tougher to guard. James is not only the best small forward in the NBA, he is the best basketball player on the planet, and in my opinion, a top ten player of all time.

David Lee has been having a terrific season and he is one of the main reasons why the Golden State Warriors have enjoyed so much success they have surprised a lot of people this season. Lee is second among power forwards in scoring, with 19.2 points per game and third in rebounds at 11.

Lee is a very crafty player who is used in a multitude of offensive sets, but is most effective in pick and roll situations because he can finish with both hands and has the ability to pull up for a jump shot. In terms of NBA efficiency, David Lee is fourth in the league behind Kevin Durant, LeBron James and Anderson Varejao. He leads the NBA in double-doubles, and because he is an adept passer frequently flirts with triple-doubles.

Recently voted to his second All-Star game this year, and with the Warriors in the thick of the Western Conference playoff hunt, Oracle Arena will be rocking once again. Lee is the most underrated and under-appreciated player in the league, but has proven to be the best player at his position. He may not make you press rewind on your DVR, but his hard work and relentlessness should earn the respect of anyone that calls themself a basketball fan.

Despite a rocky season for the Los Angeles Lakers, to say the least, Dwight Howard is still the best center in the NBA. There is something to be said about a player who can average 16.5 points, 11.9 rebounds and 2.4 blocks and still have fans frustrated about how bad he is playing.

Howard is fighting through back and shoulder problems while also receiving less touches, courtesy of the Black Hole…I mean Black Mamba. Despite all this, Howard is still dominating defensively and is one of the best athletes in the NBA, this side of LeBron James. However, he may be the best center in the NBA by default because centers are a dying breed. They have turned into soft, jump shooters who are allergic to the paint.

Dwight Howard may be the last of the paint-dominating centers we have grown accustomed to, and with the Lakers recently surging for that eighth spot in the West, we may see the real Dwight. You know, the one that goes into a phone booth with a suit and comes out with a red cape. It’s a bird, it’s a plane, it’s the best center in the NBA for years to come.