Baseball: Northridge looks for a turnaround season with new players 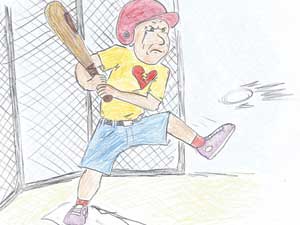 The Matadors are looking to start the 2013 season with a new vibe, and will have plenty of new faces to make that happen, with 11 freshmen and a handful of transfers.

Head coach Matt Curtis, in his third season, is looking forward to seeing how his team comes together throughout the year.

“That’s a challenge when you’ve got a lot of new guys joining the team, how to integrate them with the guys who’ve been here,” Curtis said. “But we have had a lot of time together in the fall, and a little bit of time in January to get going, and I really think we’re in a good place for that.”

The Matadors went 23-30 last season, 10-14 in the Big West Conference, and are looking to make a bigger impact with their new teammates. The team has their eyes set on contending for the championship.

Senior outfielder Nathan Ring, second on the team last season with 24 runs and a .267 batting average, said vets are taking the younger players under their wings and helping them adapt to college baseball.

“I think this is the best team that I’ve seen here in my four years,” Ring said. “So we’re really excited to get this underway. I think that we really have a complete team this year. We’ve got pitching top to bottom, good starting pitchers at the front end and we’ve got good relievers and then speed and outfield this year.”

Senior utility player Cal Vogelsang, returns as one of CSUN’s top threats. In 2012, Vogelsang hit .278 and led the team with 11 doubles.

“Most of our returning guys are position players,” Vogelsang said. “We brought a lot of new pitchers in which is what we needed after last season. I think last year we finished with like six pitchers, so we brought in about 12 new pitchers.”

Curtis is hoping that the younger pitchers will take a chapter out of sophomore pitcher Jerry Keel’s book, the ability to keep their poise and a level head with the stress of the game around them.

“I think more than anything else, he does some things with his command, and with mixing speeds,” Curtis said. “He’s not a power pitcher, but it’s his location, being able to identify a hitter’s weakness and attacking it…he leads by example.”

Keel is anticipating a good result from the incoming pitchers and hopes that they may learn from his strategies, as well as the new pitching coach.

Besides a new pitching coach, Northridge added assistant coach Sergio Brown, who will focus on the infield, base running and hitting.

“And that’s a coordinated effort with the pitchers and the infielders, particularly when there are runners at second,” Curtis said. “Coach Brown has brought a lot to us with his experiences. we tried new techniques…and I’m excited to see how that plays out.”

Curtis is anticipating much of their new running game strategy to fall upon sophomore catcher Alexis Mercado having a good season.

“I think we’ve got an opportunity to compete for our conference championship and that’s something that hasn’t happened in our sport for a number of years,” Curtis said. “And I think we have the ability to do that.”