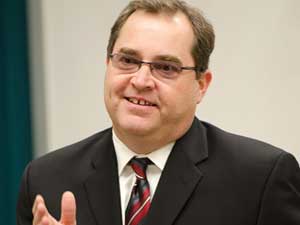 Chisholm is the fourth of five candidates for the position to be interviewed.

Growing up in Southern California, Chisholm graduated from UC Santa Barbara. He said his love of the area is what led him to look for a job away from Oregon.

“While I love my work at Portland State, I’m a southern California boy at heart,” he said.

It was in these positions that he gained valuable experience in fundraising that allowed him to make targeted investments in athletic programs, Chisholm said.

“I was able to raise (Portland State’s) scholarship budget from $2.7 million to $4.3 million to recruit from out of state and build competitive teams,” he said.

“Academic support space at CSUN could be improved,” Chisholm said.

Chisholm also addressed ways to make CSUN stand out in the Los Angeles area, where UCLA and USC dominate.

“We would have to make CSUN outreach as locally-oriented as possible,” Chisholm said. “We should utilize online and social media outlets to get students more involved in supporting our teams. We have to create a vibrant experience that invites students and the community to be a part of it. We should have spirit-based student groups and create inviting and enticing spaces for fans to come watch our games.”

Ultimately, Chisholm said he sees potential in CSUN to become nationally recognized as a standout school for sports.

“CSUN can become nationally competitive because it has the potential for facilities, the ability to draw students, and national championships in baseball, soccer and volleyball,” he said.