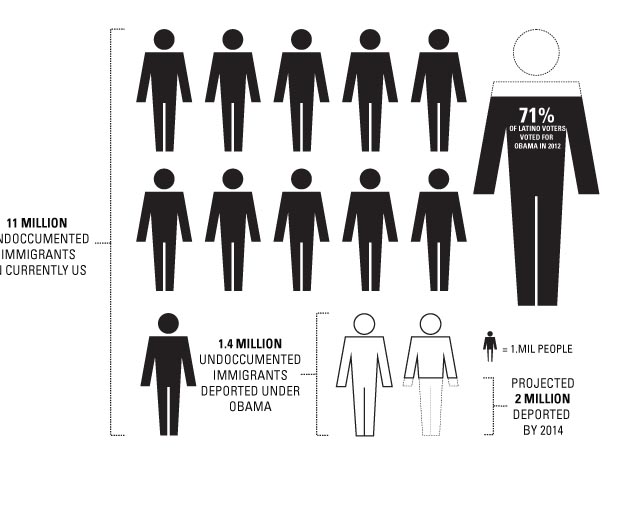 As a sign of bipartisanship, the Senate announced the two-party proposal on comprehensive immigration reform in January, which could pave a path to citizenship for an estimated 11 million undocumented immigrants in the U.S.

Eight senators outlined the plan, which was presented at Capitol Hill on Jan. 28.

President Obama praised the Senate for its proposal and the following day he revealed his own proposal on immigration reform during a speech at a Las Vegas high school.

The president briefly outlined his four-part proposal, which includes strengthening border security and a crackdown on employers who hire undocumented immigrants.

“(We need) smarter enforcement, a pathway to earned citizenship, improvements in the legal immigration system so that we continue to be a magnet for the best and brightest all around the world. It’s pretty straightforward,” Obama said during his speech.

Undocumented immigrants would be required to pass national security and criminal background checks, pay a penalty and learn English to qualify for citizenship, therefore simplifying and streamlining the current immigration system.

Additionally, the number of registered Latino voters has increased by 26 percent (12.2 million) in the last four years, according to the National Association of Latinos Elected and Appointed.

Although the majority of Latinos in the last election said that the economy was the most important issue, immigration reform has always been a vital subject, with 77 percent of Latinos who voted saying undocumented immigrants should be offered a chance to apply for legal status, according to the Pew Hispanic Research Center.

Seeing the changing landscape of voting by a fast-growing Latino base, many see both the Democratic and Republican Party as needing to involve more Latino issues, such as immigration reform.

Undocumented student and former upper division Senator for Associated Students Juan Quevedo, 26, political science major, is a graduating senior who is part of the CSUN club Dreams to be Heard, an immigrant rights and undocumented student support group.

Quevedo said he sees the Republican Party’s willingness to collaborate on immigration reform as a conscious effort to change its at-times controversial image and the need to reach out to Latino voters.

“I know there have been several Republican Party members in the past that have wanted to support things like (comprehensive immigration reform), but their general party didn’t want to support it.” Quevedo said. “They kind of went down the rabbit hole. Once they got so far in, they couldn’t back out. I think that’s where they found themselves and finally they said, ‘Hey, we gotta do something about it.’”

The Senate’s immigration reform proposal has not been unanimously supported by the GOP. Many key Republicans have expressed dissatisfaction with it, such as Sen. Mike Lee (R-Utah) and Rep. Lamar Smith (R-Texas).

Both Lee and Smith see weaknesses in their colleague’s bipartisan proposal, expressing concern that undocumented immigrants will be rewarded for living in the country illegally by giving them the chance to apply for citizenship.

“These guidelines contemplate a policy that will grant special benefits to illegal immigrants based on their unlawful presence in the country,” Lee said in a press release. “Reforms to our complex and dysfunctional immigration system should not in any way favor those who came here illegally over the millions of applicants who seek to come here lawfully.”

Gabriel Gutierrez, Chicana/o studies professor and director of the Center for the Study of the Peoples of the Americas, said he doubts that the Republican Party can successfully win over the Latino population.

“The Latino electorate that came out really hurt the GOP because of their extremist views on things like immigration,” Gutierrez said. “All you need to do is look back at Pete Wilson, former governor of California, who did the Republicans in by adapting the same extremist policy agenda, pushing (Proposition) 187 and all these other propositions.”

But border security as well as deportations have been part of the immigration reform debate for some time now, Gutierrez said.

Members of the San Fernando Valley Republicans, the Republican Party of Los Angeles and the Lincoln Club of Orange County did not respond to emails or phone calls.

Republicans are not the only ones that can bolster a strong restrictive approach to immigration. Obama has deported a record number of people in his first two years in office.

According to Immigration and Customs Enforcement, under the Obama administration there have been 1.4 million people deported. If the deportations continue at this rate, Obama could reach the 2 million mark by 2014, according to a study by the University of California, Merced.

Despite the high-level of deportation and call for more border enforcement, people are still optimistic on a comprehensive immigration reform bill in the near future.

Jesus Rios, associate justice with the Associated Students judicial court, 22, is also a member of Dreams to be Heard. Rios sees the political debate surrounding immigration reform as a good thing, no matter which side of the political spectrum it comes from.

“You’re getting support from both parties and they’re competing to get the vote,” said Rios, a senior sociology major. “If both parties want to go at it and try to make the best immigration reform, that’s fantastic. Because in the end, a lot of undocumented students that come from another country will become U.S. citizens and will help their parents be able to have a better life.”