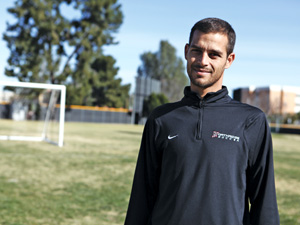 Recently named one of the top-15 assistant coaches in the country, Raz becomes the ninth head coach in the Broncos’ 30-year history.

“It’s exciting to get an opportunity, especially when it comes to such a prestigious institution and great athletic department,” Raz said. “I’m super-thrilled and super-excited, and ready to go to work and represent the Broncos to the best of my ability.”

In his eighth year as an assistant coach under Terry Davila in 2012, Raz and the Matadors had their most successful season together. Helping lead CSUN to its first Big West Championship and a berth in the NCAA Tournament, Northridge compiled a 15-7 record.

“Yossi has been a big part of our success in returning to our soccer identity at the Division I level,” Davila said in a press release. “I have seen him mature as both a player, student and coach of the game. He is ready for this opportunity and he deserves it.”

Part of Raz’s duties as assistant coach was to be the recruiting coordinator and in charge of academics for students. In 2012, senior defender Joe Franco was named a Scholar All-American, and senior defender Yuval Barak and Franco were named to the NSCAA Academic All-West Region Team.

As a four-year starter for CSUN in his playing days, Raz was named the Big West Freshman of the Year in 2001. Breaking new territory, Raz became the first player in conference history to earn All-Big West First Team honors in all four years. Earning three berths to the NCAA Tournament as a player, the Matadors advanced to the second round in 2003 after earning a bye in the first round.

Though unable to achieve a NCAA Tournament victory as a student-athlete, Raz helped lead the Matadors to a tournament victory in 2005, and compiled a career coaching record of 82-68-29 (.539) in eight years.

Raz goes to a program looking for a major turnaround, compiling a 3-11-3 season in 2012. Playing in the California Collegiate Athletic Association the Broncos went 1-11-3 in conference play.

“I was lucky enough that Terry (Davila) allowed me to interact with any aspects of the program,” Raz said. “So I feel very comfortable of all aspects, obviously recruiting, fundraising and academics, those are all major parts of a program. Now as a head coach you have to make sure you divide your time properly so all the functions of the program work. The idea is to build a quality program.”

The Broncos have never won the CCAA conference championship and last had a winning record in 2011.

Raz doesn’t see his career at CSUN coming to an end.

“I am changing roles once again, I was a student-athlete, then I changed into a grad assistant, later on into a top assistant, a little after into associate head coach and now a proud alum and supporter of the program,” Raz said, who is originally from Israel.

“Northridge gave me an opportunity when I came to America, I will always have a warm place for Northridge and the athletic department, and people in it. Coach Davila is forever to be a mentor and friend what he did for me I can’t describe in words.”