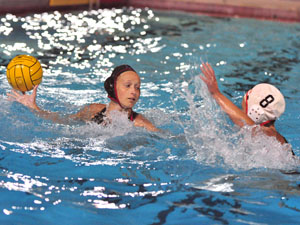 The CSUN women’s water polo team (8-1) brought its core group of players from last year back and is looking to build off its success. Northridge finished 19-20, losing to UC Irvine in the Big West Championship.

With eight out of 10 players who scored in double figures last year
returning, head coach Marcelo Leonardi has high hopes for this team.

“Our
expectations are to win the Big West championship and go to NCAA,” Leonardi said. “We feel that everybody is one year bigger, one year faster,
one year smarter and we are still looking at Northridge for that first
team in women’s water polo to go to NCAA.”

Young
had 65 goals in her freshman year, which was third best in the league
and earned her Big West freshman of the year honors, a first for a CSUN
player. She also earned Honorable Mention All-American and first team All-BWC honors.

“We have such a large group that has returned and we all
have our own strengths and those strengths have really clicked,” Young
said. “I believe we are going to do great this season.”

Leading
the Matadors with 68 goals last season, Jamison earned first-team
All-BWC honors and Honorable Mention All-American. Despite their success, she feels like the Matadors can
improve.

“We are constantly working on everything,” Jamison said.
“Everything needs work. Specifically, we need to work on communication
and defense.”

Returning sophomore goalkeeper Kiernan Davis is expected to be a force in the net for the Matadors. Playing 18 games in her freshman season, Davis was second in the Big West Conference in average saves per game with 11.41.

Despite the short season, Leonardi has already seen areas of improvement.

“We
are more athletic, our depth has definitely improved, and overall there
is a better understanding of the system of play and what we are trying
to do,” Leonardi said. “If I had to pick one thing that is our strength,
it would be team chemistry. I can genuinely say that we are family,
everybody understands their role and everyone contributes in some
aspect, and that definitely translates into the water.”

CSUN started play this season in the UC Santa Barbara tournament with a 12-6 loss to Arizona State (6-0), but have won six straight games after that.

The Matadors followed that up with a 19-7 win over Pomona Pitzer (0-2) in which 10 CSUN players scored at least one goal. Closing the tournament, CSUN recorded an 11-4 win over Sonoma State (3-4) in which junior attacker Lindy Nelson had a game-high seven goals.

At the Cal Baptist tournament the next weekend, CSUN defeated host Cal Baptist (0-7) 10-5. Nelson again led the way with four goals. Northridge went undefeated through the tournament, with a 15-7 win over Concordia (2-6) and a 16-5 win over California State University, San Bernardino (0-6).

Although every conference game is important for the Matadors, one game is particularly important to Jamison.

“Irvine is going to be a really important game for all of us,” Jamison said. “We are all going to be on it, we were so close last year and we just want it really bad.”

Northridge will get their shot at Irvine on April 7.